The mysteries are getting more complicated in these spoilers from GENERAL HOSPITAL. Franco is determined to find the imaginary friend from his childhood, Jason’s children beg him to come back to them, and Ava vows to help Patient Six in any way she can!

As they discuss his past, Franco takes the photo of him and the other child out of Liz’s hand. “My imaginary friend was very real,” he insists. But will he ever uncover their identity? Meanwhile, Michael says goodbye to Nelle. “I have to wrap up some business,” he reports. Looking into his eyes, Nelle casually asks: “What kind of business?” Could Carly be right that Nelle is just after Michael’s money?

At the long-term care facility, Sam has brought Jake and Danny to visit Jason. The boys stand at their comatose father’s bedside and Jake holds up a drawing that he made for him. “Please wake up, Daddy,” Danny begs sadly. Sam looks ready to crumble into pieces at the emotional scene, but Kristina is by her side to support her sister through this difficult time. 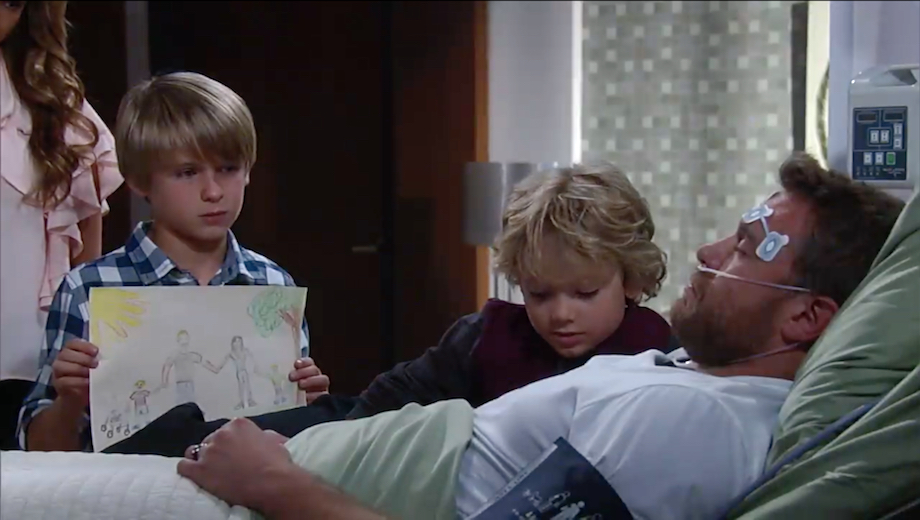 Jason’s boys beg him to get better. (Photo Credit: ABC)

Having lunch at Kelly’s, Josslyn is horrified to learn that Carly talked to Milo. “And he told me about your night with Oscar,” she informs her daughter. Is she about to put the kibosh on Joss and Oscar’s budding relationship, or give it her blessing? Over at Sonny’s restaurant, Milo has some news for his boss. “If there’s a problem, you need to tell me!” Sonny declares. What’s the latest crisis?

Having learned that Patient Six is only pretending that the Ketamine the doctors and nurses are giving him is keeping him doped up, Ava promises to keep his secret and help him go home. “The fact that you’re here,” she pleads, “means that your family is waiting for you.” As Patient Six’s soulful blue eyes look into hers, Ava doesn’t recognize them because she never knew Jason when he had his original face. Will she be able to discover his true identity and bring him back to his loved ones, whoever they might be?

Who Is Patient Six?