As Port Charles chooses a new mayor, the town’s future is in question in these GENERAL HOSPITAL spoilers, but it’s Franco’s past that could destroy his upcoming marriage to Liz! And that’s not to mention Nelle’s continuing plot to insinuate herself into Michael’s life and push Carly out. Can she be stopped?

At Charlie’s Pub, Aunt Stella doesn’t realize that she’s one of the hot topics of conversation as Jordan and Curtis worry that the man who was paid to mug her was trying to fix the election. “What am I missing here?” Stella asks, confused.

Nelle arrives at the Quartermaine mansion as Monica warmly embraces her and declares: “Your timing is absolutely perfect.” Nelle looks delighted, but Michael seems a bit confused as he wonders what Monica has planned for them. Has she thrown together a baby shower that quickly, or does Monica have something else up her sleeve? 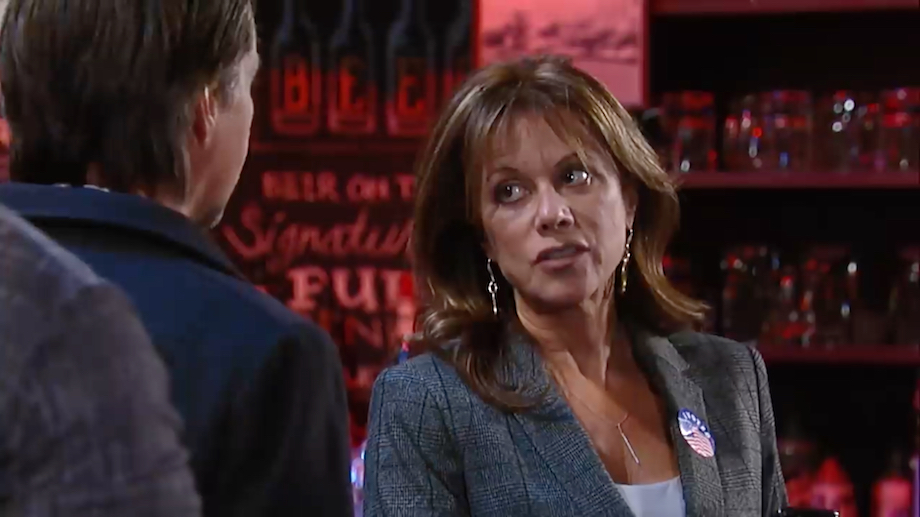 Now that the story about her and Julian has hit the press, Alexis is sure her chances of becoming mayor of Port Charles are dead and buried. “There may not be any triumph on Charles Street,” she laments to Finn. And Julian is furious that their past was made public, vowing: “Somebody’s gonna pay for this!” Meanwhile, Olivia is already picturing her husband sitting triumphantly in the mayor’s office. “My odds are improving by the minute,” Ned announces happily. Has this truly changed the course of the election?

As Liz waits by the hospital elevator, she continues to be hopeful about her future with Franco as man and wife. “This time down the aisle is the charm,” she smiles at Kim. But Franco’s past could have a very negative impact on their future as he confides to Kevin his latest breakthrough. “What did you remember?” the shrink asks him. Will Franco’s history spoil his happily ever after with Liz?

Don’t miss this tease from today’s dramatic episode, and for more GH previews, keep reading the ABC edition of Soaps In Depth magazine!

Laura Wright and Wes Ramsey Are the Cutest Couple!