Valentine’s Day in Port Charles looks like it’s going to be full of more drama than romance in these GENERAL HOSPITAL spoilers! Curtis and Jordan hit a snag, Kiki is happy to see Spinelli, Ava worries that Nelle is giving up, and while Sam and Drew are out for the night, Jason spends the holiday babysitting!

Curtis is surprised that Jordan seems to be entirely unaware that it’s Valentine’s Day. “You really don’t know what today is?” he asks the beauty. Jordan’s been through a lot lately, so who can blame her for having things other than a holiday on her mind?

At the hospital, Amy spots Griffin all dressed up and assumes he’s going on a hot date for Valentine’s. “Who’s the lucky lady?” she asks with a smile. But when she adds, “Please say someone besides Ava Jerome,” Griffin’s face falls. Will anyone ever accept their relationship? And over at the gallery, Ava is also all dolled up for her evening with Griffin, but first offers some advice to Nelle, who seems to have hit a hiccup in her plan to get back at Carly. “You’re not giving up already, are you?” Ava asks. 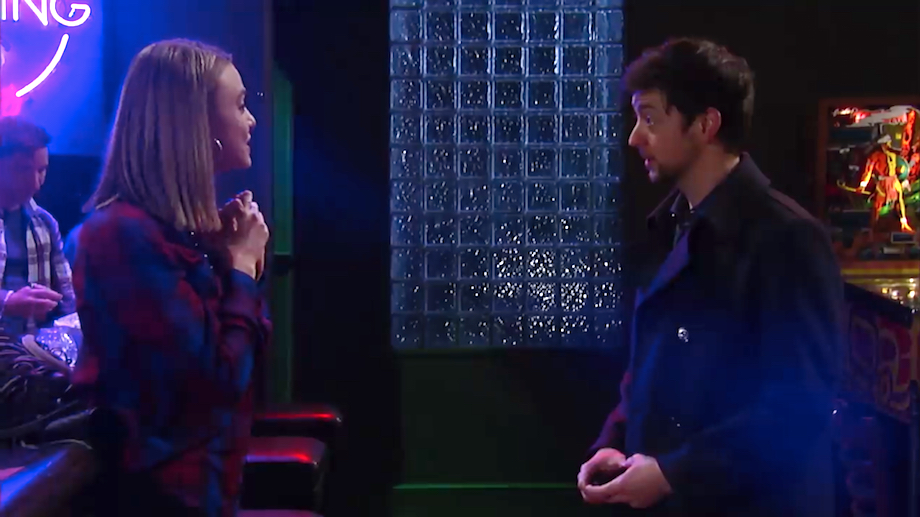 Spinelli is in Port Charles to support Maxie, but she doesn’t seem to want anything to do with him. But when Kiki runs into him at The Floating Rib, she’s very excited to see him. “Everything is great,” she declares, “now that you’re here.” But the glint in Kiki’s eyes should make Spinelli a little nervous about what she’s got up her sleeve!

Sam and Drew may have planned to enjoy a nice night out together for Valentine’s Day, but his mysterious past may get in the way. “Did you remember something?” Sam wonders, looking at his confused expression. And back at their apartment, Jason has offered to babysit Danny, but things aren’t going smoothly! “I want mommy,” the little boy complains.

Sonny may not be in a particularly romantic mood now that he’s worried about what’s wrong with his father. Will all the family drama impact their night? “I’m choosing to believe him,” Carly declares, “so should you.”