The past is coming back to haunt people in these spoilers from GENERAL HOSPITAL. Maxie is forced to do damage control, Nelle faces her shady history, Jason makes a major decision, and Franco finally gets some answers!

Spinelli got the wrong end of the stick when he thought Nathan was cheating on Maxie with Amy, but when he confronted his friend, Nathan blurted out the truth in front of everyone that what’s really going on is that he’s Man Landers! With the crowd in an uproar, Maxie rushes in to try and fix everything. “Spinelli!” she shouts. “I can explain everything!” But will anyone believe the story she’s about to tell? 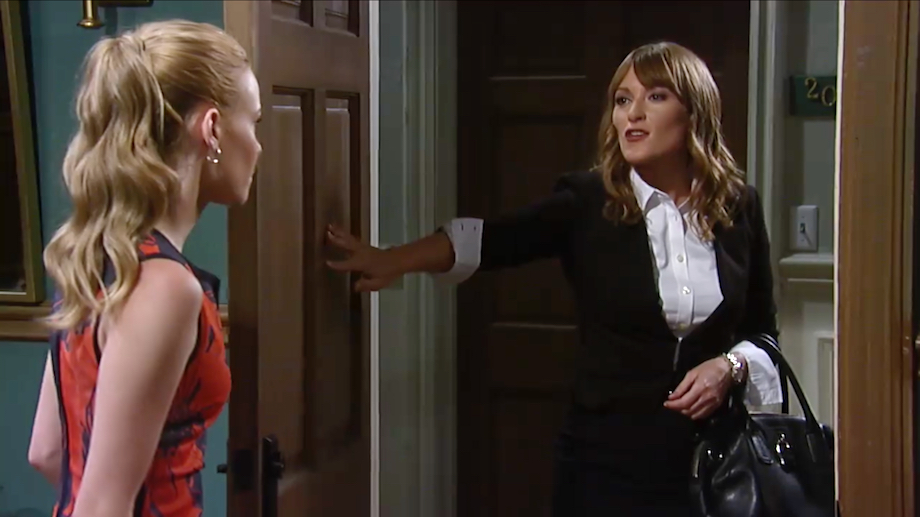 Nelle is stunned by a face from the past! (Photo Credit: ABC)

Nelle opens her door and it shocked to find Sharon on the other side. Confronted by the sister of her dead fiancé, Nelle tries to shut the door in her face, but Sharon holds it open. “Did you really think you could run away from what you did to my brother?” she snarls. Was Nelle really responsible for Zach’s death? Michael certainly doesn’t think so, and faces off with his mother to get her to stop trying to interfere in his relationship with Nelle. “Back off and let me life my life!” he shouts at Carly. But can she really do that? Has Carly ever been able to back off when she thinks she’s right about something?

Monica is overjoyed by the news that Jason has finally come out of his coma. “This has got to be your lucky day,” Liz enthuses to her in the hallway. But in Jason’s room, he’s making a big decision about his future as Sam stands by his side. “I can’t take the risks anymore,” Jason informs Sonny. “And I hope you can accept that.” Sonny was unable to escape the mob life, but could Jason be luckier? Of course, the question of whether or not he’s really Jason is still hanging in the air as Franco continues digging into the past. As he searches for the truth about Jason and Drew, things take another turn as he comes face to face with the anonymous buyer of his painting. Who could it be?