Summer is heating up in Port Charles and in these spoilers from the week ahead on GENERAL HOSPITAL, things look like they’re about ready to explode! There will be romance, confrontations, fights, and some familiar faces!

Carly is eager for Sonny to get out of “The Business” so they can attempt to lead a normal life, but of course, that’s easier said than done. Sitting in The Floating Rib, Bobbie warns Carly: “Brace yourself.” What bad news does she have for her daughter this time? Meanwhile, Sonny finds himself in danger again and Max throws his boss a gun to defend himself! Who’s gunning for Sonny now?

Curtis and Finn confront Jared to try and figure out exactly what happened to Hayden, fearing the worst. Curtis lets his temper get the best of him and he slugs the guy, and Finn throws Hayden’s ex-husband up against the wall! “Where is she?!” Finn screams right in his face. But does Jared have the answers they’re looking for? 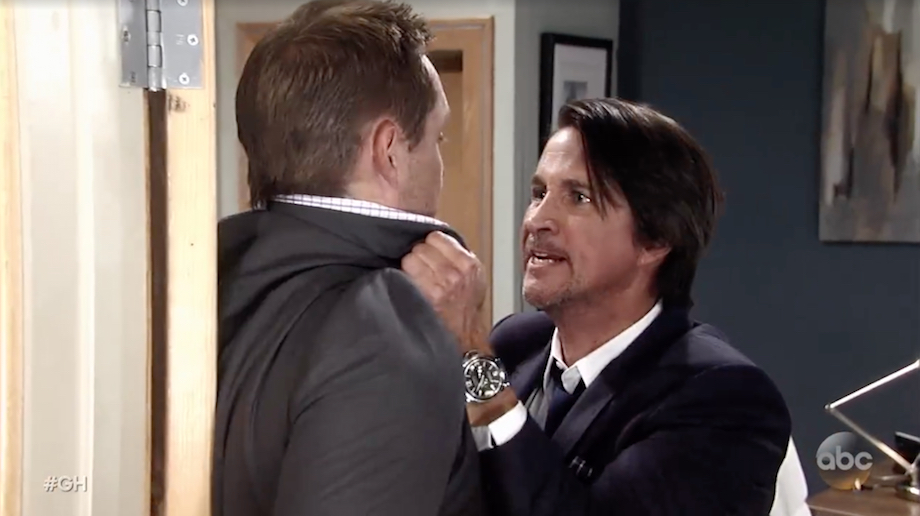 MUST SEE: Steve Burton Is Back on Set at GH!

Franco and Liz have some hot sex, Nathan and Maxie share a tender embrace, and Griffin and Ava… kiss?! That’s right, Griffin takes Ava’s face in his hands and plants a kiss right on her lips!

Things take a turn at Julian’s trial and the accused leaps to his feet shouting: “That’s a lie!” Scotty rushes to intercept, but has the damage already been done? Will Julian be shipped off to prison? Meanwhile, Alexis is trying to distance herself from the drama by having a picnic in the park with Kristina. But it’s her daughter’s drama that catches up to them when her ex, Parker, appears! What does the college professor want this time?

And Parker’s not the only one who’s back — Spinelli has returned, too! Maxie sits with her pal on a park bench and warns, “Don’t keep me in suspense.” What might he be investigating this time around? Has she asked The Jackal to figure out the true identity of “Man Landers,” and has he already uncovered Nathan and Amy’s big secret?

Don’t miss this tease for the thrilling week ahead, and for more GH previews, keep reading the ABC edition of Soaps In Depth magazine!

Jeffrey Vincent Parise and Maurice Benard Reunited and There Was Dancing!

William deVry Has Reached a New Deal with GH!