Sonny is still missing in these spoilers from GENERAL HOSPITAL, but it’s not all bad news! It looks like Sam is starting to wake up… is she on the road to recovery?

Michael is still worried about Sonny and the fact that no one has been able to locate him. “The longer it takes to find him,” he insists to Nelle, “the worse his chances get.” After his encounter with Stone’s spirit, Sonny was inspired to climb out of the pit in which he’s trapped, but with his injuries, can he escape on his own?

Bad enough Jared confronted Hayden at her new home, but now he’s surprising her at work! “I have a broken heart,” he declares. “Do you think you can fix it?” Just as Hayden’s future was looking up, her past rears its ugly head. Can she figure out a way to get her ex-husband to stay quiet or will the truth about what she did mean the end of her relationship with Finn? Because the doc is out at the nurses station asking for some advice from Griffin. “Like sure, I mean it’s my engagement ring we’re talking about,” Finn admits. “I don’t want to screw things up.” 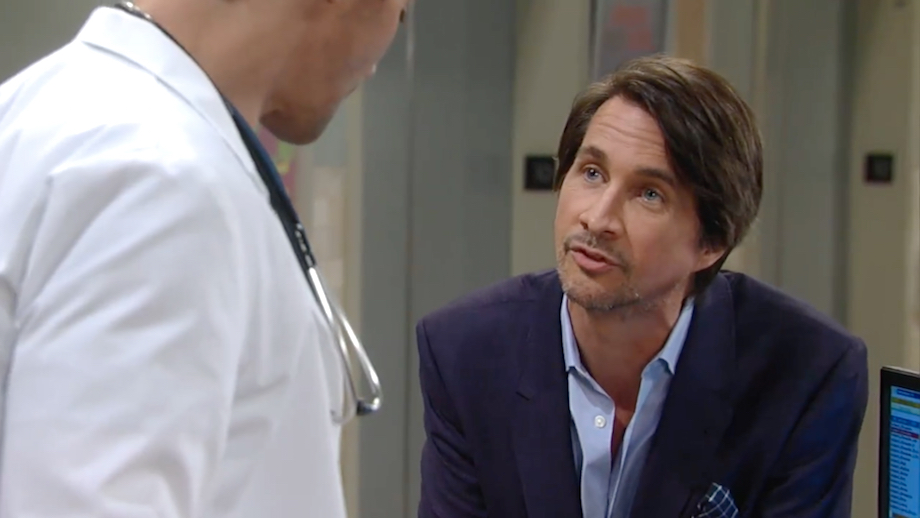 Finn wants everything to be perfect for Hayden. (Photo Credit: ABC)

MUST SEE: Michael Sutton Opens up About His “Amazing” Return to GH as Stone

Young love continues to bloom as Oscar gives Josslyn a necklace. She tries it on and asks, “How does it look?” Oscar seems nervous as he tries to maintain eye contact. As cute as these two are, can their budding romance survive the adult drama swirling around them?

At the hospital, Jason is startled by a change in Sam’s condition. He calls out her name and rushes to her bedside as his wife stirs, her eyes fluttering. Is Sam coming out of her coma? Or is her condition about to take a turn for the worse?

Ryan Paevey Stars With Another Maxie in a Romantic New Movie!

The Truth Behind Sam’s Devastating Diagnosis