The drama explodes in these GENERAL HOSPITAL spoilers! Sonny continues to struggle as his father slips away, Anna is closing in on Faison’s son, Drew and Franco team up, Finn defends Alexis, and Elizabeth holds the key to destroying Sam’s life! It’s all happening this week!

Sonny is trying to do whatever he can to help his father even as Mike’s Alzheimer’s grows worse. “I don’t mean to push, okay,” Carly assures her husband. “It just scary seeing how much Mike is slipping already.” And a tearful Sonny reaches out to his father to ask him to accept their help. “Just let us take care of you,” he begs. Can they make his final days happy ones?

Since learning about Faison’s degenerative brain disease, Peter has been worried, and finally goes to the hospital to get checked out. “So, I hear you are here for some genetic testing?” Griffin asks. Peter admits: “I recently learned that my father had Huntington’s Disease and he could’ve passed it down to me.” And later, when Anna informs the doctor that she’s tracking Faison’s son, Griffin is wary. “Why do I get the feeling that you’re not telling me something?” he wonders as she struggles to meet his gaze. If she tells Griffin about the Huntington’s Disease, will he put two and two together?

Over at Charlie’s Pub, the patrons are stunned when Finn hauls off and slugs Julian across the face! “Don’t you ever touch her!” Finn shouts as a startled Alexis looks on. But his impulsive actions have repercussions and Finn is placed under arrest by Detective Chase! Meanwhile, over at the Metro Court, Maxie is taking legal action of her own. “I’d like a restraining order,” she announces. “Against Lulu Falconeri.” Is this friendship over? 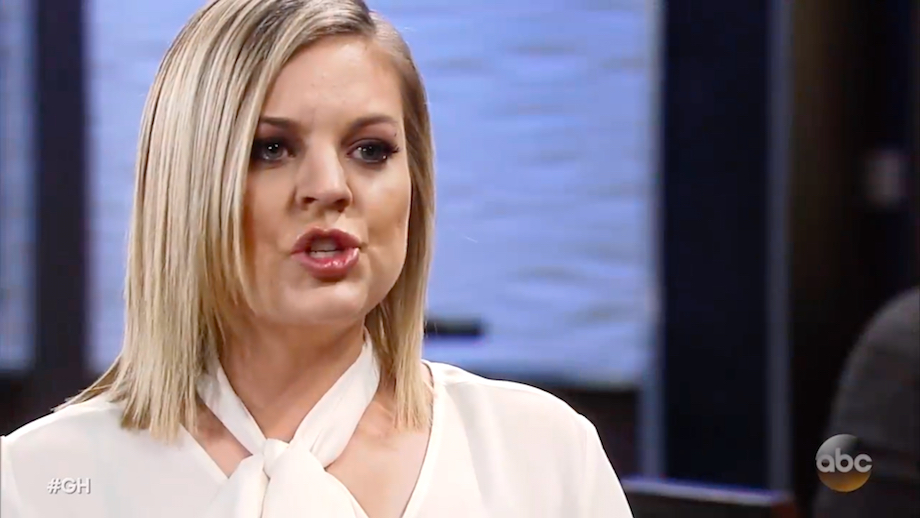 Jim may have tried to turn Drew against Franco, but thankfully he’s too smart to fall for that. “We will work together to find out what happened to us when we were kids,” Drew assures Franco. Meanwhile, Jim continues with his plans for Port Charles. “I’ve come too far to stop now,” he warns Ned. “Nobody’s gonna get in my way.” Can he be stopped? Together with Drew, Franco declares: “Let’s find out the truth.” And when Drew bursts into a room to find Jim standing over a distraught Franco, he shouts: “Get away from him! Back up, right now!” What is really going on?!

Carly is horrified to find Nelle getting comfortable at the Quartermaine mansion. “Is Nelle staying here?” she asks, aghast. Olivia smiles ruefully and reports: “That’s right. Nelle’s the newest member of our household.” Nelle grins at her rival like butter wouldn’t melt. “Isn’t that great?” she smiles. Can Carly convince Monica she’s making a big mistake?

Since Sam and Jason decided to have their conversation in the hospital hallway, they should count themselves lucky that it’s only Liz who seems to have overheard them. “I’m still keeping secrets, Jason,” Sam confesses. “I haven’t told Drew that I love you. I need to tell Drew the truth. I’ve been lying to him and myself long enough.” But will Sam be able to come clean to Drew before Liz exposes the truth herself?

Don’t miss this epic tease for the dramatic week to come, and for more GH previews, keep reading the ABC edition of Soaps In Depth magazine!

Vote on Which Man Sam Should Choose

Is Faison Really Dead on GH? — Anders Hove Speaks Out