Franco’s art show brings together much of Port Charles in these spoilers from GENERAL HOSPITAL, and there will be much drama to be had at the party! But not everyone is attending, as Sam must deal with Jason’s condition and Sonny takes an important meeting!

Anna remains determined to get Finn to help her investigate the stolen diamonds Valentin is connected to. Since he’s a doctor, she wants him to get some information out of hypochondriac jewel fence Cassandra Pierce, but Finn flatly refused. Still, the spy isn’t giving up that easily, giving him a call. “I need to speak with you,” she insists. “It’s really important.” Will he be able to say no?

Sitting on the couch, Valentin notices that Nina is all dressed up and heading for the door. “You going somewhere?” he asks. Is she planning to attend Franco’s art show with the others? Over at the gallery, Liz encounters an older woman and asks if she’s a fan of the artist as well. “His biggest fan,” the woman insists. And poor Liz has no idea she’s meeting Franco’s mom! Gesturing at the canvas of the two boys, Franco informs Kiki and Scott: “That painting is not for sale.” 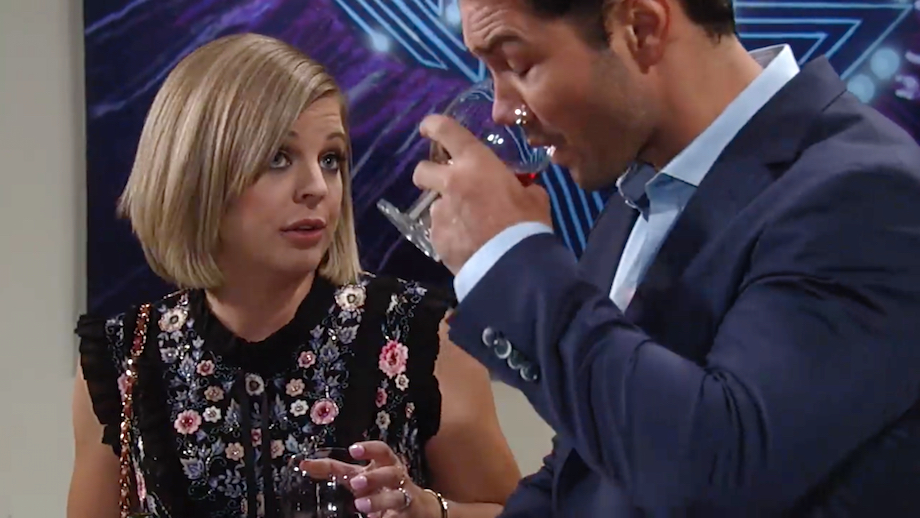 Since Nathan asked her not to expose the Man Landers secret, Maxie informs him she has another exclusive scoop that she could use to get her job at Crimson back. “What’s the story?” he asks as he pours a drink. And when she announces: “Better in Bed Than Dead: My Night With a Serial Killer,” he nearly chokes on his wine! Will Maxie really go public about her liaison with Franco just to get her career back on track?

Now that he realizes he can’t escape the mob, Sonny is making sure he doesn’t make any more mistakes that could put those he loves in danger. But what does he want from Curtis? “I was about to make you the same offer,” Curtis remarks to Sonny. What are they planning?

Jason’s condition doesn’t seem to be getting any better, and Monica and Alexis look to Sam who, as his wife, must make the final decision about his fate. “There’s only one choice I can make,” she admits, her voice cracking. Surely she isn’t going to give up on her husband?

Don’t miss this tease for today’s exciting episode, and for more GH spoilers, keep reading the ABC edition of Soaps In Depth magazine!