It’s a time for celebration in these GENERAL HOSPITAL spoilers, but not for everyone. As he prepares to marry Liz, Franco is freaking out, Sam and Drew celebrate Scout’s birthday, and Mike’s Alzheimer’s continues to affect everyone around him. Is there anything Sonny can do to make things better?

Julian has been attempting to reinvent himself, and while his efforts seem to be wasted on Alexis, it looks as though Kim is falling for him! “You’re a good guy, Charlie,” she smiles. But knowing how his criminal past has destroyed his relationships with everyone around him, Julian is still being cautious. “Don’t be so sure,” he warns.

With the big day approaching, Franco is getting more and more nervous about tying the knot with Liz. Already wearing his wedding tuxedo, he pays a visit to Kevin for some reassurance. “Tell me what I wanna hear!” he shouts at the shrink. But does Kevin have anything that can ease the groom’s nerves? 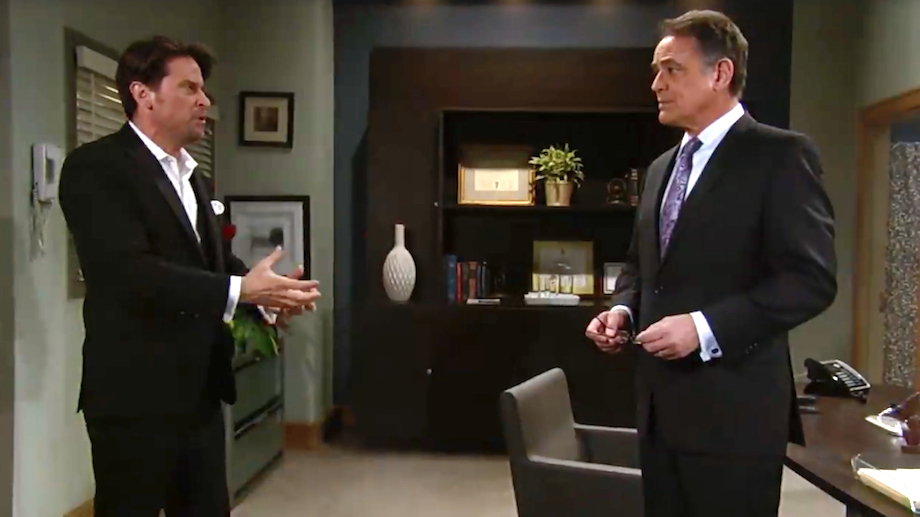 Will Franco walk down the aisle with Liz? (Photo Credit: ABC)

With Drew’s help, Curtis managed to sneak a peek at Jim Harvey’s plans for the Charles Street redevelopment and now he’s going over them at the police station with Jordan. As they investigate, he notices something unusual. “Why the hell is Charlie’s Pub still on this map?” he wonders. Why isn’t Harvey planning on demolishing Julian’s business along with the rest of the area?

It’s Scout’s first birthday, so family and friends come together to celebrate. Wearing a party hat and a white dress, the little girl sits on Sam’s lap as Drew holds out a cupcake with a candle on it to blow out. Everyone sings “Happy Birthday” as Sam looks adoringly at her husband.

At the police station, Mike still hasn’t been released, and Michael pays a visit to his grandfather to help keep him company while they work on getting him out. But the conversation turns awkward when Mike asks: “When is Morgan gonna get here?” Back at Sonny’s, Rita has arrived in Port Charles and is stunned when Carly updates her on Mike’s current situation. “What the hell is going on?” Rita exclaims. And at the art gallery, Sonny confronts Ava in the hopes of getting her to drop the charges against his father for damaging some artwork. “What’s it gonna cost to make this go away?” he demands. This is the perfect time for Ava to prove she’s turned over a new leaf, but will she?