So many people in Port Charles are searching for Sonny in these spoilers from GENERAL HOSPITAL. And a deadly new danger could mean his time has run out!

Sam has come out of her coma, but with no memory of shooting Sonny and leaving him to die in the pit at the distillery. “There’s something I’m not remembering,” she declares to Alexis as she struggles to piece together the puzzle. Meanwhile, as Garvey lays unconscious in his hospital bed, someone sneaks into his room and closes the blinds for privacy. Are they looking to question Garvey to find out where Sonny is or silence the criminal once and for all?

MUST SEE: Tyler Christopher Joins the Cast of DAYS OF OUR LIVES! 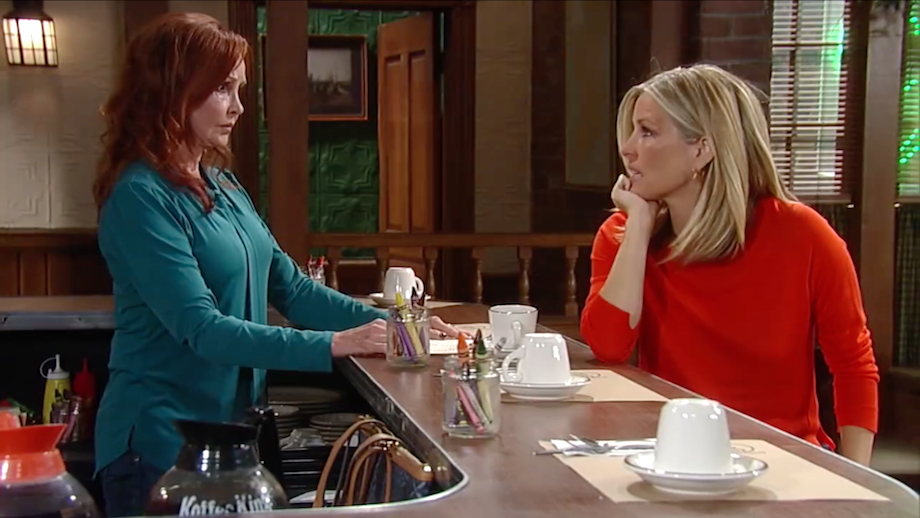 Carly has run out of options. (Photo Credit: ABC)

Valentin makes a phone call to alert someone, “I seem to have something that belongs to you.” Meanwhile, Carly is at Kelly’s venting her frustration to Bobbie about her missing husband. “It’s as if he disappeared off the face of the Earth,” Carly sighs. However, Michael may finally have a lead on Sonny’s whereabouts as he realizes that the necklace Oscar made for Josslyn from metal they found at the distillery is actually a bullet casing. “Can you tell me exactly where you got this, right now?” Michael asks his sister.

If anyone’s going to rescue Sonny, they’re going to have to hurry, because his time is nearly up! Although he was inspired by Stone’s ghost to fight for survival, Sonny’s attempt to climb out of the pit didn’t go well and now the mobster lies unconscious on the floor while at the construction site above a voice can be heard calling: “20 minutes to demolition!” Can anyone save him in time?

Emme Rylan Is Back Working at GH and Brought Her New Baby Girl With Her!

Finola Hughes Is Back From Vacation and Taping at GH!