Nothing seems to be going right in these GENERAL HOSPITAL spoilers! Alexis is still struggling to make a fresh start, Julian finds himself under attack, Curtis’ Aunt gets arrested, and Sonny demands answers from his father!

Anna is sitting in the dark drinking a glass of wine on her couch in front of a roaring fireplace when she is startled by someone in her home. But instead of an intruder, it’s family! “Oh my God,” Anna gasps. “Robin!”

Alexis and Finn have found themselves in each others’ orbits quite a bit lately, and they’ve started to get to know each other. “If I can survive Julian,” Alexis says sardonically, “I can survive anything.” And over at Charlie’s Pub, Julian is having a chat with Kim when he suddenly finds himself surrounded by reporters, one of whom sticks a recorder in his face! “What the hell is this?” he asks, annoyed. Kim looks at Julian, concerned. What trouble has he found himself in now? 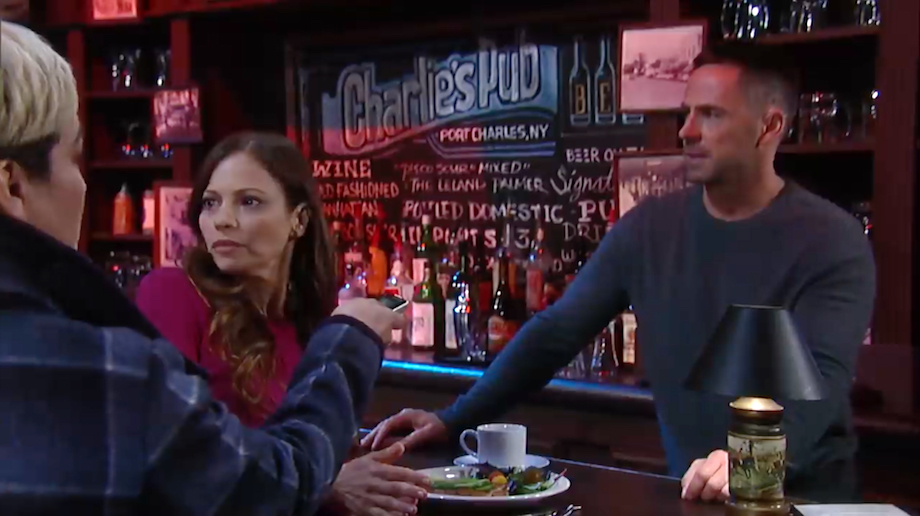 Kim finds herself caught in the middle of the drama! (Photo Credit: ABC)

At the police station, Dante is mourning the loss of Nathan, who was more than his partner on the force. “Well, now I just feel like I lost a brother,” he sighs, his voice choked with emotion. Curtis is at Kelly’s when he gets a phone call that upsets him, and it’s likely to have something to do with his Aunt Stella, who finds herself being dragged through the PCPD! “Un-cuff me this minute!” Stella screams at the officers as they bring her before Jordan. “This is ridiculous!”

In Brooklyn, Sonny has tracked down his father, who has once again found himself in big trouble after a large sum of cash has gone missing. “What happened to the money, Mike?” Sonny barks. He assumes his father is gambling again, but could there be something even more dangerous going on?

Vote for Each Character’s True Love in Our GH Valentine’s Day Poll!

Everything You Need to Know About Sonny’s Father, Mike

Ryan Paevey Speaks Out About His GH Exit