Things are looking bad for Sonny in these spoilers from GENERAL HOSPITAL. As his condition worsens, is a visitor from beyond the grave there to urge Sonny to fight for survival… or escort him to the other side?

Overjoyed at his newfound happiness with Hayden, Finn heads to The Floating Rib to get them some dinner. But there, he runs into Curtis who gives him a little bit of a reality check. “Happiness ain’t gonna protect you from a relapse,” he warns the doc. But the couple’s future may be in jeopardy as Jared shows up to confront Hayden while she’s alone in the house! “We’re done with each other,” she insists, stunned to see her ex-husband again. But he promises that things aren’t nearly as over as she thinks they are! 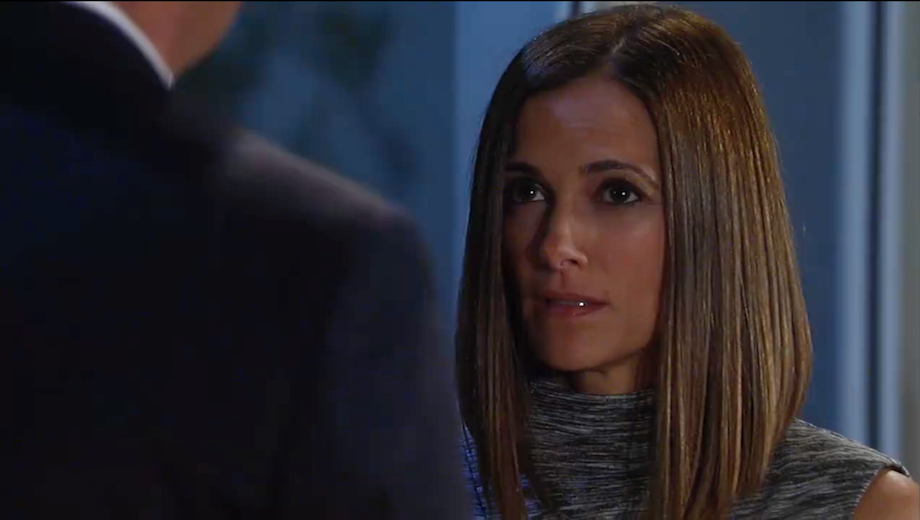 Hayden’s past is catching up with her! (Photo Credit: ABC)

MUST SEE: Ryan Paevey Stars With One of GH’s Maxies in a New Movie!

As Julian worries about Sam, who is now laying in a coma, Ava fills him in on the unusual visit she had from his daughter before she ended up in the hospital. “What was most surprising of all,” she relates, “is how she was trash talking Sonny.” Meanwhile, over at Sonny and Carly’s Josslyn is surprised to find Michael and Nelle. “Where is Mom?” she asks her brother, snarkily adding, “and your good-for-nothing father?” Carly’s over at the hospital desperate to get Garvey to tell her exactly where Sonny is and what he did to him. “If you can’t get this bastard to talk,” she warns Dante, “I’m gonna find someone who can.”

Still trapped down in the pit at the distillery and bleeding out, Sonny is growing weaker and beginning to get delirious. As a glowing light shines down on him, a smile spreads across Sonny’s face as he says, “I’m just happy to see you.” Will a special visit from the late Stone Cates inspire Sonny to fight for his life, or is he there to take him away?

Check out this tease for today’s emotional episode you won’t want to miss, and for more GH previews, keep reading the ABC edition of Soaps In Depth magazine!

The Truth Behind Sam’s Diagnosis on GH