Kristina’s life got complicated again when Parker returned to Port Charles, but things on GENERAL HOSPITAL have taken another turn with the introduction of Valerie into the mix! As soon as Val and Kristina had a little chat about overbearing moms in the episode that aired on Aug. 22, some viewers expressed interest in seeing their friendship develop into something more. And the actresses took to Instagram to tease fans about what was coming up next on the soap! “Three’s company,” Lexi Ainsworth (Kristina) shared. “Fun scenes coming up on GH!”

Brytni Sarpy’s Valerie has been without a storyline or a love life for quite some time now, but it looks like things are looking up on the storyline front, at least! The actress shared the same selfie that Ainsworth did of them with co-star Ashley Jones (Parker), but added some more expressions to make a fun montage of the trio! “Kinda lovin’ my new scene partners,” Sarpy posted. “See ya Monday!”

MUST SEE: The Tweet That Had Fans Convinced Michelle Stafford Is Leaving GH

Many GH fans have taken issue with the Kristina and Parker pairing, but have insisted that it is the age difference between the two characters — and that they were originally teacher and student — that is the problem, not that they are a same-sex couple. So might those fans be okay if Valerie explored a different side of her sexuality and struck up a relationship with Kristina? Currently, Valerie was just acting as Kristina’s wing “man” at Lesbian Night at The Floating Rib, but in the interest of making Parker jealous, the pair shared a steamy kiss. So might there be more between Val and Kristina than anyone expected? 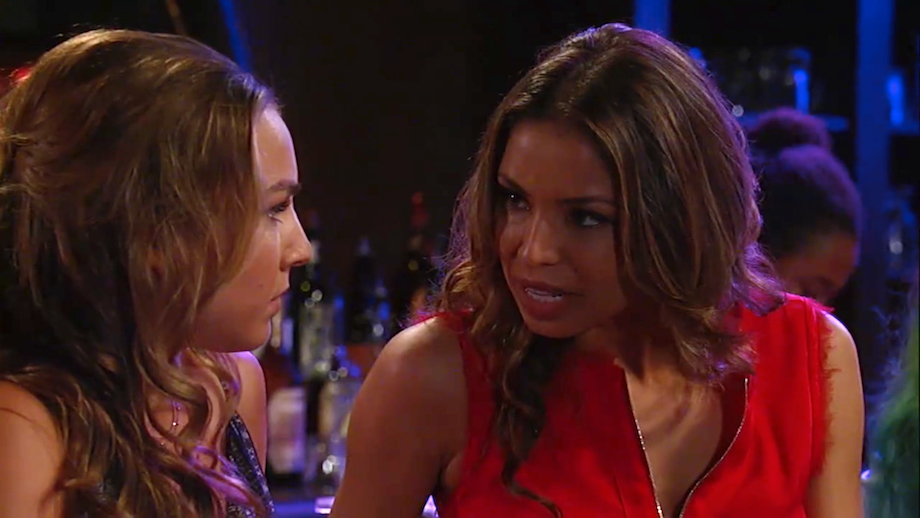 Valerie was surprised to realize where Kristina had taken her! (Photo Credit: ABC)

On Ainsworth’s Instagram, some fans are thrilled by this new wrinkle to the storyline. “Val and Kristina would definitely be intriguing,” commented johnthebeastfromtheeast. “Could Kristina get her to change teams?” But the diehard “Pristina” fans are hopeful this is just a minor distraction on the road to Kristina and Parker’s ultimate reunion. “Kristina and Parker have the best chemistry,” posted jerismoss. “I love Valerie, but let’s bring in another hottie for her!”

Will Valerie and Kristina become more than just friends? Will Parker try to reunite with her former pupil and give their relationship another chance? Stay tuned as this dramatic storyline continues to unfold! And for more GH news, keep reading the ABC edition of Soaps In Depth magazine!

Kimberly McCullough Confesses Directing at GH Would be “a Lot of Work!”