When he joined the cast of GENERAL HOSPITAL as the mysterious Peter August, actor Wes Ramsey was thrilled to become a part of the long-running soap. Especially since it means working on the same show as girlfriend Laura Wright (Carly)! So he was extra excited when GH asked him to do a Twitter chat with fans during the episode where Griffin confronted Peter about his true identity of Henrik Faison! “I love getting to know and share with all the awesome GH fans out there,” he began. “You’ve been kind and welcoming to me. I truly appreciate it.”

Because Peter is still quite a mystery, many fans were curious who he takes after more, his mother Anna or father Faison. “That’s a great question,” Ramsey teased. “I can’t wait to learn more about that myself! An incredible and complicated backstory has been gifted to me.” 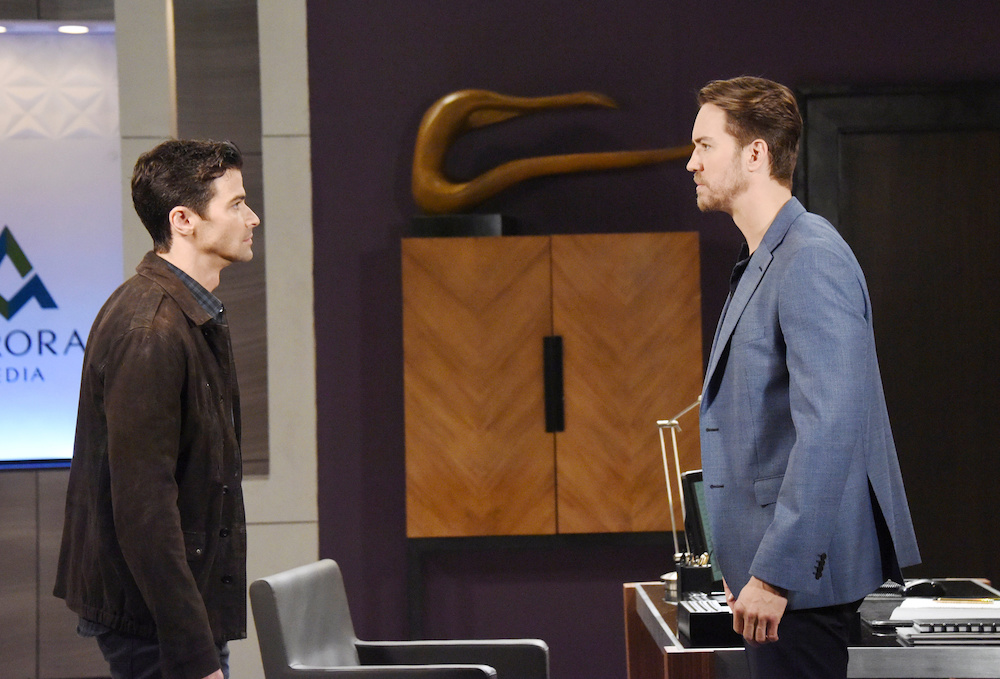 Ramsey appreciated the praise for his emotional scenes with Matt Cohen’s Griffin. “We were definitely swinging for the fences!” (Photo Credit: XJJohnson/jpistudios.com)

And of course, now that Griffin knows that Peter is really Henrik, the truth will soon be revealed to others. “Peter certainly understands what’s at stake and how serious it is,” he mused of the current storyline. But as to wether Peter is truly a good guy with a bad lineage he’s trying to escape, Ramsey admitted: “Not quite sure it’s that simple.” Still the actor added that “his complexity” is his favorite thing about his Port Charles alter ego.

Naturally, when one fan asked which GH castmember he would want to work with, he picked his lady love! “I’d always like to work more with the stunning and talented Laura Wright. #sheisincredible,” Ramsey tweeted. But he’s thrilled that playing Anna Devane’s long-lost son means he’ll be working more with Finola Hughes in the future. “She’s so good!” he enthused.

Unfortunately the hour came to an end and Ramsey had to say goodbye, but he was glad for the opportunity to interact with GH fans, even on social media. “I just want to say thank you to everyone who joined me here today!” the actor concluded. “So cool to connect with you all and share our excitement and love for such a special show!”

Love GH? Be sure to join our We Love General Hospital Facebook group) to chat about all the latest storylines and juicy gossip!

Share Your Opinion on a Potential Peter and Maxie Pairing)

How Wes Ramsey and Laura Wright Met and Fell in Love)