If you thought it was crazy to have two Jasons on GENERAL HOSPITAL, what about two Carlys?! Hot on the heels of Steve Burton’s highly-publicized return to Port Charles — with Billy Miller still playing the role of Jason — comes news that former Carly, Tamara Braun, will be rejoining the soap she once called home! After rumors began circulating in September that it was a possibility, Braun’s return was finally confirmed on Oct. 25! “Okay, it’s official!” she tweeted after the news finally broke.

Braun will first air in the GH episode scheduled to air Wednesday, Nov. 22, but fans of Laura Wright’s Carly shouldn’t worry, because she’s not going anywhere — Braun will be playing a new character. “I have to say, I think I messed up in our first scenes a couple times because I was so fascinated watching her and I was like, ‘Oh, it’s my line!'” confided Wright. “She’s got a great character, too, so it’s a lot of fun.”

It has now been revealed that Braun is playing Kim Nero, the mysterious mother of the equally-mysterious Oscar, and our friends over at TV Line offered an exclusive peek at her very first appearance!

Many fans were right in predicting that Braun would be playing Oscar’s mom, but some still insist that she has a connection to the two Jasons mystery. And it’s also a shame that she’s not part of Nelle’s storyline because when Chloe Lanier (Nelle) tweeted a photo of them backstage at GH and using the hashtag “#twin,” we noticed that the two lovely ladies do look quite a bit alike!

Braun has quite an extensive daytime resume. She played Carly on GH from 2001-05, earning herself a Daytime Emmy Award nomination for Outstanding Lead Actress in 2004. In 2008, Braun joined the cast of DAYS OF OUR LIVES as the villainous mob princess Ava Vitali. It was a short run, but long enough to nab her a Daytime Emmy Award for Outstanding Supporting Actress! Later that year, she moved to ALL MY CHILDREN to play Reese Williams, who was involved in daytime’s first same-sex marriage with Eden Riegel’s Bianca.

Braun returned to DAYS in 2011, but as a new character, Taylor Walker, a run that lasted less than a year. In 2015 she reprised her role of Ava on DAYS for the soap’s 50th anniversary. And she also returned to GH in 2014 for a special appearance with fellow former Carly, Sarah Brown, in a one-of-a-kind scene where Sonny interacted with three of the actresses who have played his wife over the years. 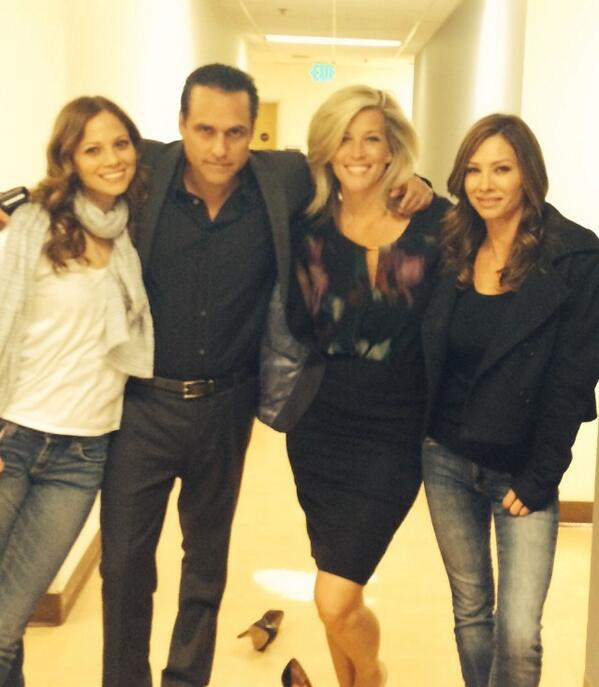 This isn’t the first time that an actor has returned to GH in an entirely new role. Brown, who originated the role of Carly, also returned to the soap in the new role of Claudia Zacchara in from 2008-09. And that’s not to mention the other, non-Carly actors, who have done the same thing like Anthony Geary (Luke/Bill), Kristen Alderson (Starr/Kiki), and Michael Easton (John/Silas/Stephen/Caleb/Finn)!