In the course of their maid of honor and best man duties, Katie and Thorne flirted up a storm. Thorne asked about the “mystery man” in her life, though she didn’t reveal that it was Wyatt. Later, Katie found herself tactfully suggesting to Wyatt that perhaps he shouldn’t join her at Ridge and Brooke’s wedding ceremony lest they start tongues wagging and steal attention away from the bride and groom on their big day. Wyatt grudgingly agreed, but set out to plan a romantic evening to surprise her with when she returned from the event.

While Katie was attending her sister’s wedding, Wyatt and Liam got into a deep discussion about relationships, with the latter giving his brother some sobering advice. Later, spying on the wedding proceedings through Katie’s trusty telescope, Wyatt inadvertently saw his lady love caught on the receiving end of a passionate kiss from Thorne! Wyatt very quickly put away the romantic spread he’d laid out for Katie. When she returned home after the party, he didn’t let on what he’d seen and instead made a bold suggestion to the brunette about the future of their relationship, one that left Katie downright bewildered. Thorne eventually made another gambit to show his interest in Katie, and after learning the identity of her mystery man, he made his move to secure a future with her. Feeling at a crossroads, Katie confided in Maya about her newly complicated love life. 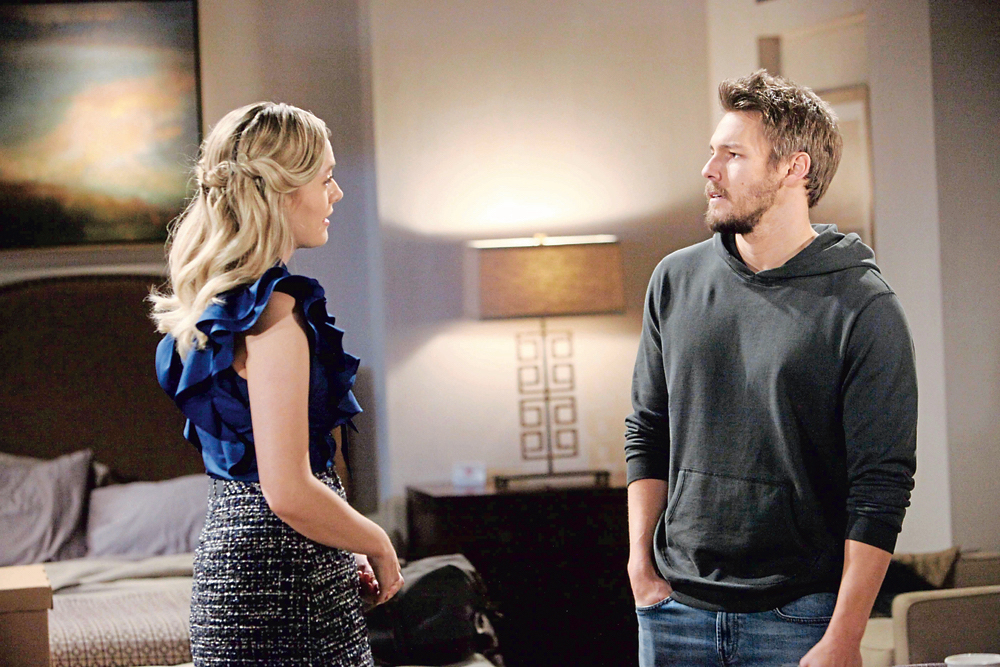 “Liam, as a man with numerous suitors, it is imperative that you remain in good health. Let’s get out and go for a jog!” (Photo Credit: Howard Wise/jpistudios.com)

Hoping that their wedding would serve as an inspiration to friends and family (especially those like Steffy and Liam who were having issues), Ridge and Brooke exchanged rings and vows and were declared husband and wife (successfully, this time), with Stephanie’s portrait hanging over the mantle as a silent witness of the proceedings. Days later, still basking in their joy, the newlyweds celebrated a romantic Valentine’s Day, as did a happy Rick and Maya.

Hope continued to be a comfort and sounding board to Liam as he struggled to come to grips with the reality of his marriage’s collapse. But after making a pact with Steffy at Brooke’s wedding, Hope continued trying to bring about some sort of healing for the estranged couple. Steffy was taken aback when Hope brought up a moment from their past and agreed to forward a Valentine’s gift to Liam from his wife. The blonde later made an unselfish request of Liam, and, when Steffy invited Liam to her first ultrasound, it was Hope who convinced her ex to attend. While learning the sex of their unborn child during the doctor’s appointment, Steffy and Liam couldn’t help but share a rather emotional moment together.