Caroline gave her Uncle Bill a real dose of what-for for messing with her life and, ultimately, costing her a future with Thomas. Going toe-to-toe with Justin as they argued about the rightful succession to the throne at Spencer Publications, Wyatt demanded that the lawyer show him the paperwork proving that he was the new CEO of the company. Overwhelmed by the circumstances, Justin accused Wyatt of being the one who shot Bill! Detective Sanchez interrogated both men, and though Wyatt’s hatred toward his father was palpable, Sanchez and Deputy Chief Baker ultimately had another suspect they thought was the likely culprit. Meanwhile, Justin wasn’t pleased when Jarrett showed up at the office with a curious request.

Even as Sheila eyed an unstable Pam at Il Giardino and began to suspect she might have tried to off the publishing magnate, Ridge was the person who ultimately took the fall for the crime. He was arrested, leaving Brooke to rally the rest of the Forrester family in support of her husband. Carter tried to work some legal magic on Ridge’s behalf, to little avail. During dinner with Liam, Steffy asked him to help exonerate her father. Liam visited Bill in the hospital to discuss the events leading up to his attack. Bill maintained that Ridge pulled the trigger, but Liam later found an important piece of evidence that proved enlightening. He ultimately revealed his theory to Hope, who agreed to help him figure out his next move. 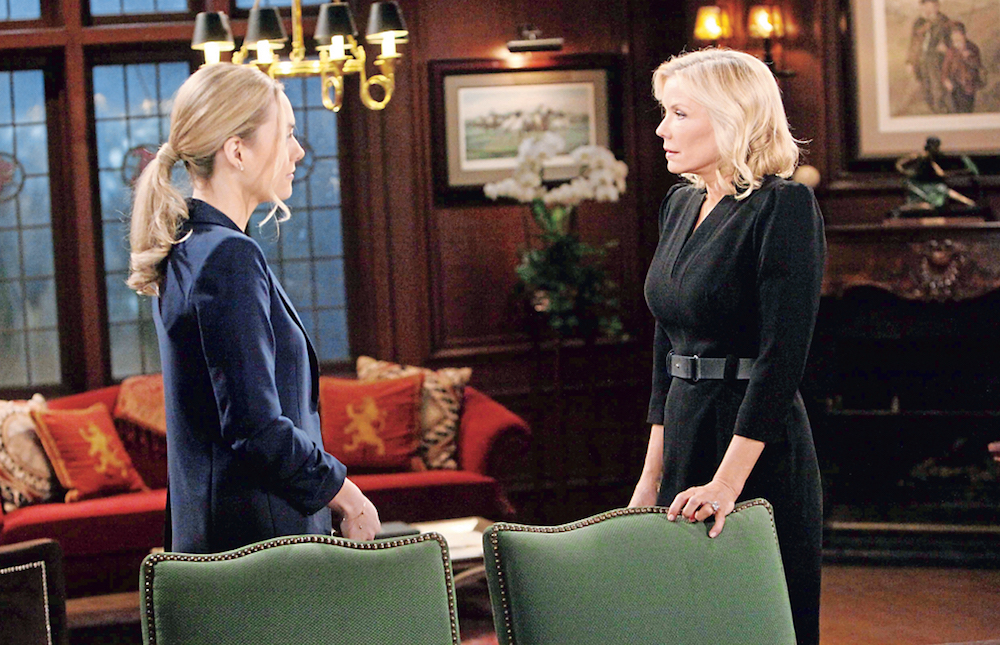 ”Mom, you and I both know that the Logan women have never really been good at friend-zoning guys.” (Photo Credit: Howard Wise/jpistudios.com)

Knowing that Brooke had blabbed to Hope about Bill’s proposal, Steffy worried the blonde would run to Liam with the information, which wouldn’t necessarily help her effort to win him back. When that’s exactly what happened, Steffy lost her cool with her half-sister and accused her of trying to sabotage the reunion. Stef fy later defended herself when Hope pointed out that her troubles with Liam were the direct consequence of her tawdry indiscretion with Bill! After learning Hope’s true feelings for Liam, Brooke advised her daughter to remain “just friends” with him.

Quinn Wasn’t Off the Hook Yet!

Brooke was beside herself about Ridge’s incarceration, so Hope suggested perhaps her mom could get through to Bill regarding his accusation. Brooke confronted her ex and angrily accused him of using Ridge to settle a score. After hearing about Ridge’s arrest, Quinn tried to console Eric by pointing out that there were many other possible suspects whom Bill had mistreated over the years. Detective Sanchez began to wonder if perhaps Quinn deserved a closer look, and he proceeded to interrogate her about the night Bill was shot. While visiting Ridge in jail, Thorne and Steffy were surprised by Ridge’s vehement defense of Quinn when her name came up as a possible suspect.

Should Bill Give up on Steffy or Keep Pursuing Her?