After confronting Bill at his office to demand that he do right by Spectra Fashions given all the grief he caused her last year, Sally wasn’t content to just sit around and hope she got through to the businessman. Instead, she returned to his office a short while later and took much more drastic measures to get her point across. When Justin happened upon this confrontation, he was hesitant to leave her alone in the office with his boss, worried about what she might do to Bill… or his beloved Skye! Bill was ultimately unfazed by Sally’s impressive show of intimidation.

After separately nursing heartache over the end of their relationship, Katie and Wyatt came to the realization that they had ultimately been played by Thorne. Declaring that they were ready for a more serious commitment to one another, the couple rejoiced in their engagement, but worried about how Bill would take the news. They soon got their answer, and it wasn’t a pleasant one. In fact, Bill became totally enraged upon finding out that his son and ex-wife were deeply in love. Bill threatened Wyatt and issued an ultimatum, but the young man fought back with a few threats of his own! Justin warned Bill of the consequences of losing the support of both of his grown sons. Later, Bill made a brash move in firing one of his most loyal employees!

Sheila Kept an Eye on Things

Accompanying Steffy to lunch at Il Giardino, Ridge was irritated when they spotted Bill and Justin across the restaurant. Sheila, who was on the clock as a server, watched with interest as the two men locked horns in a spat that soon turned physical! 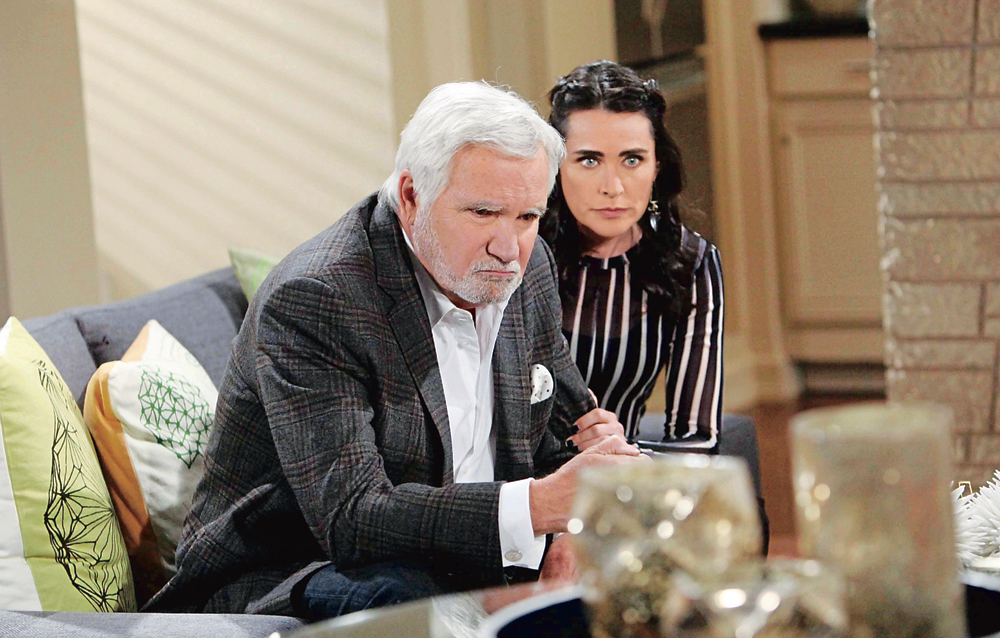 Hope’s in a Quandary

Hope was both flattered and excited when Liam met up with her at Il Giardino and expressed a desire to work with her on the relaunch of Hope For The Future. When Liam showed up at Forrester, he took the wind out of Steffy’s sails by informing her of the real reason for his visit. She was filled with jealousy when he spoke about working with Hope, but grudgingly settled for his response of “maybe” when she asked him to join her for a home-cooked dinner. When Ridge later found Steffy cooking up a storm in anticipation of Liam’s visit, he was pleased, hoping this might be the first step in the couple’s reconciliation. Hope, meanwhile, told Brooke how conflicted she felt over Liam. On the one hand, she wanted to honor her promise to help Steffy fix her marriage. On the other, she could no longer deny that she was still madly in love with him!

Quinn worried about Eric’s health after he found out the shocking news about Bill and Steffy’s affair. But of course, she was also deeply concerned about Wyatt! Though Quinn had been privately elated by Katie and Wyatt’s split, she immediately jumped to her son’s defense when his engagement to Katie brought out Bill’s vindictive side. Quinn promised Wyatt that she’d take care of Bill and his threats. In a menacing state of mind, she confronted Bill to give him her own two cents about his treatment of their son!

Will Katie and Wyatt Make it Down the Aisle?