After Steffy tearfully confided in him about the real cause of her marriage’s end, Ridge felt certain that Bill had taken advantage of his vulnerable daughter. Dismissing her claims that she was as much at fault as Bill, Ridge took off for Spencer Publications to give the publishing magnate a piece of his mind… and fist! Concerned about her dad’s rage, Steffy turned to Brooke to intervene. Learning of Steffy and Bill’s one-night-stand, Brooke was stunned. She first confronted Bill, who defensively declared that he was in love with Steffy. Brooke tried, but failed, to keep the latest family gossip from her inquisitive daughter, Hope. When Ridge later came face to face with Liam, he encouraged his son-in-law to make peace with Steffy… but wage war against Bill.

With fresh wounds inflicted by Ridge, Bill showed up on Steffy’s doorstep worried about her. Rather than continuing to apologize for their night together, Bill said he refused to live in shame for what they’d done, and he reiterated his love for her. Finally, he asked Steffy to give him a chance to make her happy, saying he would do anything for her and the baby. Steffy, however, was still far too hung up on Liam to give Bill the answer he was hoping for. 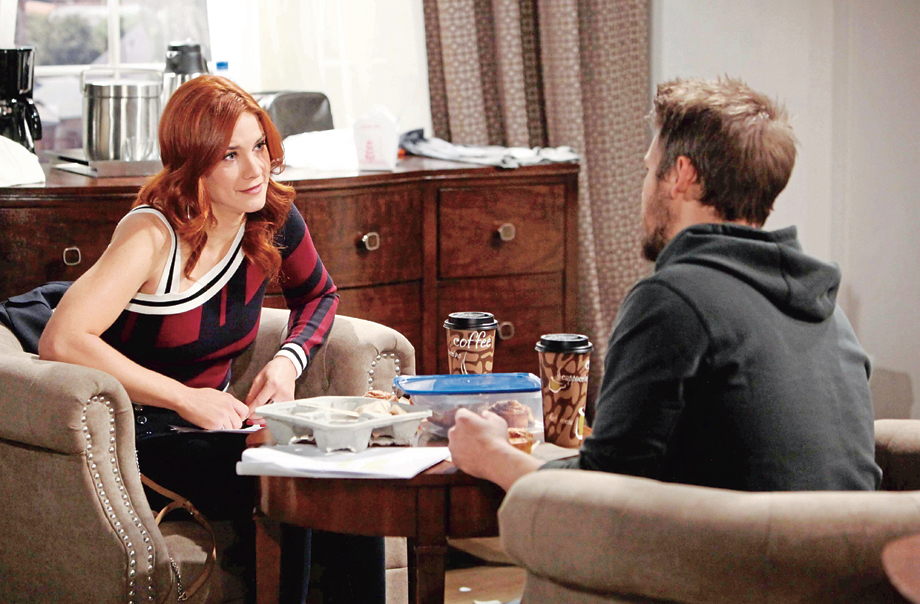 ”I made you cookies. Okay, the elves who live in a tree made them, but I paid for them. With your money.” (Photo Credit: Howard Wise/jpistudios.com)

A Big Announcement… and Request

Thorne was annoyed when Ridge was late to a family meeting at Forrester that he, himself, had called. When Ridge finally showed, he and Brooke happily announced to all that they’d set a date in the very near future for their nuptials. Brooke assured a disbelieving Thorne that Ridge would never let her down again. Meanwhile, Quinn graciously offered up her and Eric’s home as the wedding venue. Ridge extended an olive branch to Thorne by asking him to be the best man. Thorne agreed with one stipulation. Katie happily signed on to be Brooke’s maid of honor, which meant that she and Thorne would be working together to plan many of the wedding details. Ridge and Brooke hoped that their own story of forgiveness and second chances would serve as inspiration for Liam and Steffy’s current impasse. They later begged Liam to come to their wedding with Steffy in order to take a step toward healing their relationship. Steffy made the same request of her ex, asking if he could find it in himself to join her for the special day.

After initially trying to encourage Steffy to reunite with Liam, Hope turned on a dime once she learned she’d slept with Bill. Before she could confront Steffy, Hope had an awkward run-in with her ex-husband, Wyatt, during which it became clear that they still had much unsaid business between them. Steffy later became defensive when the blonde paid her an unexpected visit to discuss her horrible betrayal of Liam. Meanwhile, realizing that she now had some stiff competition when it came to the race to be Liam’s next love, Sally cyber-stalked Hope (with some help from Darlita) to get more information about her rival. Later, the redhead brought a still-sulking Liam some baked goods and put herself in a vulnerable position when she admitted to the distraught young man how she really felt about him.

Should Bill Pursue Steffy or Give up on Her?