Liam’s shocking takeover of Spencer is going to have massive repercussions. In these spoilers from THE BOLD & THE BEAUTIFUL, Steffy worries about her husband while Bill attempts to cover his tracks. Will the truth come out anyway?

Having been blackmailed by Liam into giving Spencer to him in exchange for his silence about his crimes, Bill now has to explain his actions to Brooke, who is completely in the dark about everything. “You don’t get ahead playing by the rules,” Bill grumbles. “You make the rules.” But Brooke is naturally confused as to why her husband is giving up control of Spencer to his son. “Why do you need to hand the company over to Liam?” How will Bill explain his actions without mentioning what Liam is holding over his head? Because as much as Brooke loves her hubby, learning he lied that Caroline was dying and arranged for Spectra Fashions to be burned to the ground might be a deal-breaker! 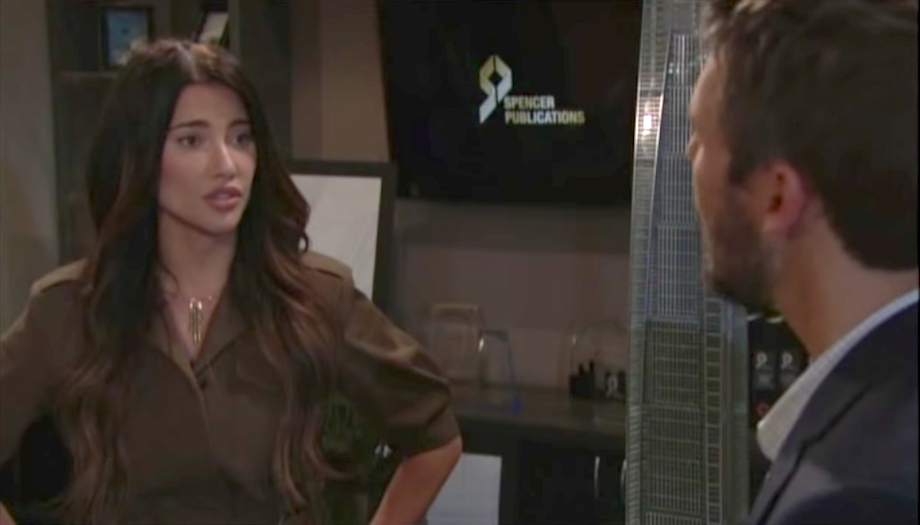 Steffy worries that Liam has made a terrible mistake. (Photo Credit: CBS)

After her meeting with Sally, Steffy heads over to Bill’s office at Spencer where Liam is now in the driver’s seat. She’d tried to talk him out of sending Bill to prison for his crimes, but she’s also concerned about how Liam has chosen to deal with the situation instead. “I know that you could make this company better under your leadership,” she starts. Liam can tell that his wife is trying to get at something and asks if there’s a “but” coming. “Yeah, there’s a ‘but,’” Steffy admits. “I don’t care about this company right now. I care about you and your father. The effect this will have on your relationship.”