Now that the furor over the Spectra fashion show has died down a little, the attention is returning to Quinn and Ridge’s affair in these spoilers from THE BOLD & THE BEAUTIFUL!

Katie corners Quinn in the kitchen to remind her that she will always protect Eric from her. “I’m gonna be watching you,” she warns with a tight smile. “Try to go behind his back and I’ll be there. Whether it’s in his kitchen or Forrester Creations.” Quinn just sits there and takes it, because she knows she’s in the wrong. But is there anything she can say to convince Katie she can be trusted?

Meanwhile, in the living room, Eric knows something very bad happened and demands the truth. “What happened in Sydney, Ridge?” he asks. “You and Brooke were supposed to get married. What happened?” Ridge sighs as he tries to think of a way to explain why he and Brooke have split up that doesn’t actually include telling Eric the truth! 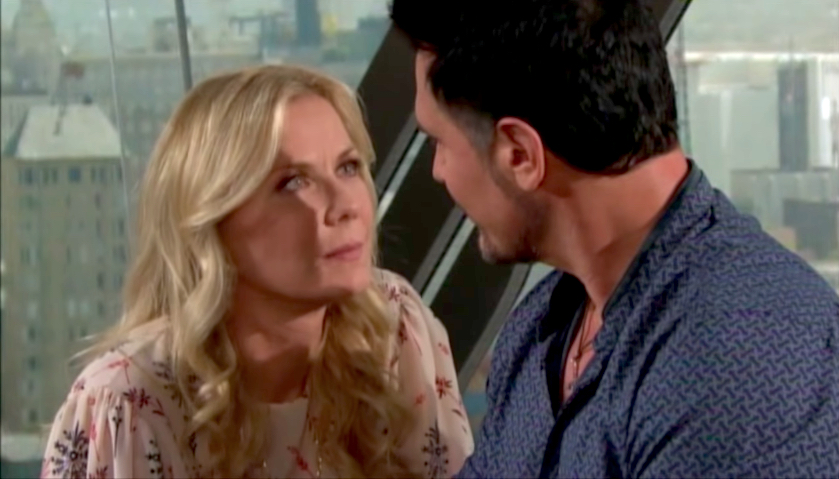 MUST SEE: The B&B Emmy Nominees Speak Out!

Meanwhile, having been betrayed by Ridge for the umpteenth time, Brooke has returned to Bill’s arms. After professing her love and kissing him passionately, she promises, “I will never turn my back on you again.” Has Bill finally won the war for Brooke’s heart? Or does Ridge still have something up his sleeve to win her back? (Though we’re not sure what that would be, after what he did!)

The Most Stunning Daytime Emmys Red Carpet Looks Ever!