A familiar face returns in these spoilers from THE BOLD & THE BEAUTIFUL, but why has Thomas really come back? And even as the prime suspects continue to deny shooting Bill, Liam vows to find the guilty party!

Thomas broke Sally’s heart when he decided to leave Los Angeles to be with Caroline and their son, Douglas. But has he come back just to apologize? “I can see how much I hurt you,” he admits to the redhead. “I’m sorry.” Will she be able to forgive him? Because even though it turned out that Thomas had been manipulated by Bill and Caroline into thinking she was dying, he still chose to leave Sally anyway! 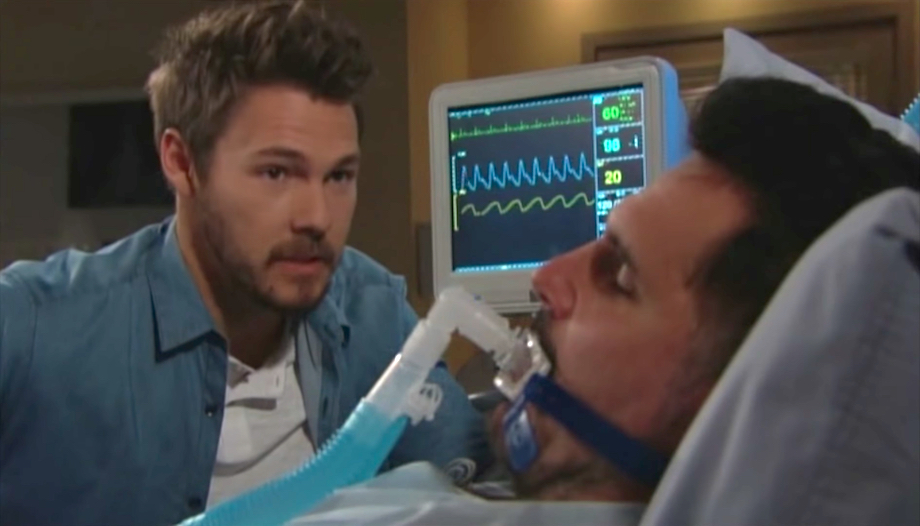 Liam is by his father’s side following the shooting. (Photo Credit: CBS)

Brooke is naturally suspicious of Ridge, considering how much he hated Bill Spencer, but he insists that his hands are clean. “I didn’t do it,” he assures his wife. “I didn’t shoot Bill. But I would love to shake the hand of whoever did.”

At the hospital, Bill’s family is sitting vigil waiting for him to regain consciousness following his surgery. Liam takes his turn at his father’s bedside, and despite all their recent differences and arguments, he vows to find out who did this. “We’re gonna find the person who did this to you,” he promises. But could the shooter be someone closer than Liam realizes?

Everything You Need to Know About Thomas Forrester

Don Diamont Injured Himself Before the Italian DANCING WITH THE STARS Even Started!

Who Shot Bill Spencer on B&B?