The fallout from Chloe’s confession continues to rock Genoa City to its foundations in these spoilers from THE YOUNG & THE RESTLESS!

Now that they know that Victor was the one who had been working with Chloe to frame Adam for murder, Nick insists to Nikki and Victoria that they can’t let The Mustache get away with it. “He is just as guilty as Chloe for killing Adam,” Nick argues. Nikki slowly walks towards Nick and Victoria as she quietly reminds them, “And no one can ever know about it.” Will they really agree to keep their father’s dirty little secret and let Victor get away with virtual murder?

Meanwhile, Victor is sitting in his office when the door opens and Chelsea walks in, fresh from her on-air plea for Chloe to come home and get the psychiatric help she so clearly needs. Her face is unreadable as Victor looks up at her from his desk — Just how much does Chelsea know about everything that’s happened?

MUST SEE: Justin Hartley Cast as an Exotic Dancer in a New Movie! 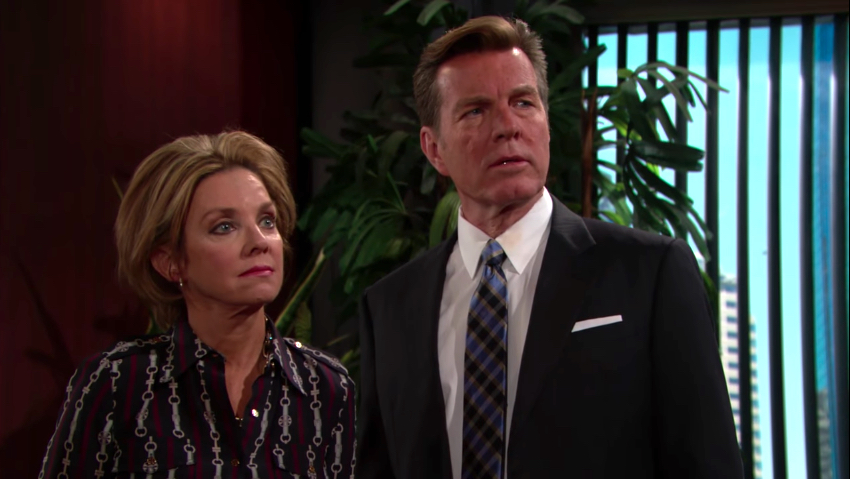 Gloria and Jack might be the oddest couple Genoa City has seen in quite some time!
(Photo Credit: CBS)

MUST SEE: Max Shippee Joins the Cast of Y&R!

At the Jabot office, Phyllis is stunned to find Gloria and Jack together, and can’t believe what her eyes are seeing! “Gloria and I are both single,” Jack announces defiantly. “We’re not hurting anyone.” Gloria stifles a giggle as Phyllis just stares at them both with disdain. Bad enough she lost Jack, but to see him getting romantic with Gloria has to sting quite a bit! How will Phyllis react to their affair?

Michael Muhney Shares a Heartfelt Message With His Y&R Fans!

Who is Juliet on Y&R? – Meet Laur Allen!

Get to Know Y&R’s Father Todd and His Portrayer, Corbin Bernsen!