After Phyllis hired J.T. to find the scam artist ripping off Fenmore’s, the sleuth uncovered a name — Alexandra West — but the woman had died years ago. Unbeknownst to them, Chelsea posed as Alexandra to close down a bank account filled with pilfered Fenmore funds! Meanwhile, Phyllis began to suspect Chelsea after she learned of the loot stashed in the penthouse walls. To prove it, Phyllis lured Jordan back to town, forcing him to admit that Chelsea was capable of such a scheme! Later, Chelsea freaked when she received threatening text messages and believed Phyllis was trying to intimidate her. The frazzled fashionista visited Adam’s columbarium, but became paranoid when Sharon showed up. After she left, Chelsea went to retrieve a stash of cash she’d hidden, but was shocked to find the space was empty! Upon receiving another mystery text, Chelsea hurried to show Victor… only to find out he’d been sending them and knew she had been stealing money! Victor gave the stolen cash back to Lauren, with the stipulation that she not ask where it had come from. Of course, when Lauren shared the news with Phyllis, she connected the dots back to Chelsea! Across town, Nick began to suspect Chel- sea of lying. To save herself, Chelsea claimed Jordan was behind the theft! Nick suggested they move forward… which prompted Chelsea to propose to the hunk

Victoria hired J.T. as Newman’s head of security as part of her power struggle against Ashley. Alas, Ash remained unfazed. Later, Billy persuaded Ashley and Jack to call a truce so they could help Traci, who was devastated after Dina failed to recognize her. Jack attempted to get back into Ashley’s good graces by vowing to overturn the Abbott blood amendment. Yet Ashley told him that she’d never trust him again or return to Jabot! In response, Jack hired another exec to replace his sis! Meanwhile, Victoria tried to poison her dad against Ashley by questioning her loyalty to Newman. When that didn’t work, Victoria met with Jack, suggesting they team up to oust Ashley, forcing her back to Jabot! 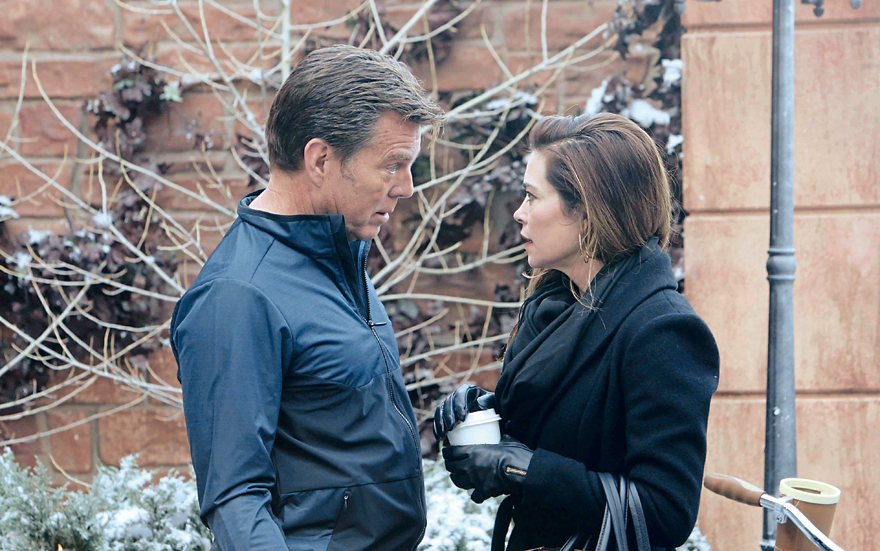 Hilary misunderstood Devon’s offer to buy GC BUZZ back — thinking he was giving her a high-profile position at Hamilton-Winters! Devon quickly corrected his ex, which led to a fiery argument. Afterwards, Hilary revealed that she’d started her fertility treatments. Devon invited Mariah, Tessa, and Hilary to Top Of The Tower, where they encountered a drunk and belligerent Noah. The hunk blasted Tessa, then punched Devon when the billionaire came to his ex-girlfriend’s defense! Devon reported the incident to Victor, who ordered his grandson to clean up his act… or else! Hilary was bitten by the green-eyed monster when Devon introduced her to his new musical artist, Simone. When Hilary argued with him about the creative direction of THE HILARY HOUR, Devon suggested her mood was being affected by the hormones she was taking… which outraged Hilary all the more!

J.T. floated the idea of remarriage to Victoria, but she quickly torpedoed the thought. The hunk visited Traci on the day of Colleen’s birthday, and the two reminisced about her life. Tensions soared at a Valentine’s Day party when J.T. observed Victoria and Billy dancing a little too close and stormed off. Across the room, Hilary freaked out Phyllis by suggesting that Billy was preparing to propose. When Billy failed to pop the question, Phyllis insisted that she was relieved. Cane and Lily marked their V-Day anniversary by renewing their wedding vows.

What Happened to Neil on Y&R