Nick accepted Chelsea’s proposal, but they decided to keep their engagement quiet while attending Noah’s dinner at Top Of The Tower. There, Noah announced he’d be moving to work in Newman’s Mumbai office. Meanwhile, Phyllis pushed Chelsea about scamming Fenmore’s, prompting the fashionista to order Phyllis to back off… or she’d tell Nick that Christian was not his son! Shocked, Phyllis teamed up with Sharon to uncover the truth. Despite their barely-concealed animosity toward one another, Sharon and Phyllis managed to prove that Chelsea was telling the truth about Adam being Christian’s father. Feeling the walls close in on her, Chelsea pushed Nick to elope, pronto! When Nick balked, Chelsea settled for his suggestion that they adopt each other’s son. Even though Sharon and Phyllis agreed to keep Christian’s paternity a secret for fear of breaking Nick’s heart, Sharon changed her mind and called him. However, before she could tell him the truth, she was hit on the head and collapsed! Later, Nick and Nikki found the unconscious beauty and whisked her to the hospital. Believing Chelsea might escape, Phyllis raced to the penthouse only to find out that the designer had snuck out the secret passageway! The fleeing con artist picked up Christian and Connor from the ranch, but dropped Christian off on Victoria’s doorstep before taking her son and escaping Genoa City!

At the hospital, Sharon woke up but had no memory of being hit over the head. Upon returning to the penthouse, Nick discovered a letter that Chelsea had written admitting her deeds and decision to leave town. Still, that was nothing compared to Sharon telling him that Christian wasn’t his son! Devastated, Nick moved out of the penthouse, but kept quiet about Christian’s true paternity. When he worried that Victor might learn the truth, Sharon and Phyllis promised to keep his secret. (Of course, none of them realized Victor already knew the big news!) Later, Anita arrived and told Nick that they had unfinished business! 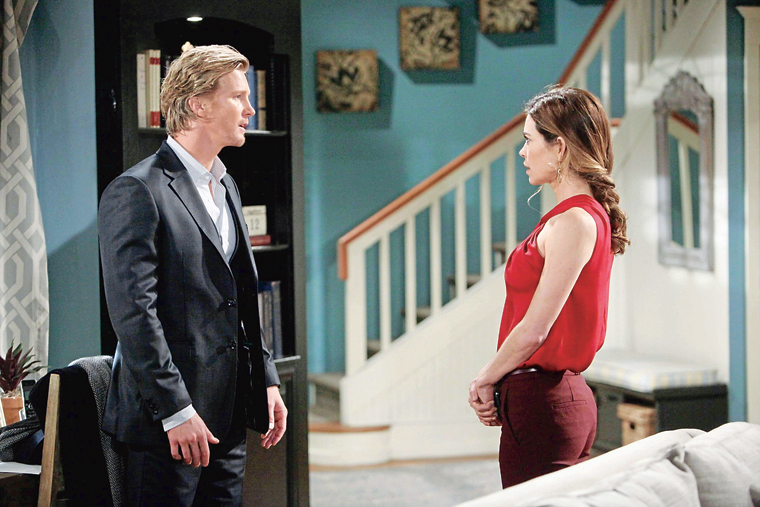 ”Victoria, if I’d wanted someone to nag me, I’d have stayed with Mac.” (Photo Credit: Howard Wise/jpistudios.com)

Hilary gave Devon a flash drive at work, forgetting that it held Juliet’s confession that she hadn’t been sexually harassed by Cane. Understandably furious upon seeing the footage, Devon shared it with Cane and Lily, who blasted Hilary! The vixen apologized and promised that she was a changed woman. Alas, Lily, Cane, and Devon refused to believe her, with Devon even saying that she wasn’t ready emotionally to be a mom! Hoping to do damage control, Hilary publicly apologized on THE HILARY HOUR. Devon wasn’t impressed. Hilary threatened to quit the show, which prompted Devon to threaten to sue her for breach of contract! Yet when Hilary bailed on the show after receiving a mysterious phone call, Devon was so impressed with Mariah’s solo hosting duties that he considered accepting Hilary’s earlier resignation!

Jack and Victoria met to formulate a strategy to force Ashley out of Newman so she’d come back to Jabot. Suspicious upon spying them together, Ashley pressed Billy to find out what was going on. J.T. revealed that he was working with Paul to get the goods on Victor. The sleuth reminded Paul and Christine that he’d only agreed to the deal to keep Nikki out of trouble. Later, J.T. was stunned to learn that Mac was suing him for full custody of their kids. When he shared the news with Victoria, she called Mac… which didn’t go down well with J.T., who angrily told her that she needed to mind her own business!

With Chelsea Gone, Should Nick and Sharon Reunite?

Lexi Stevenson Opens up About Suffering From Endometriosis