Desperate to write a hit song, Tessa secretly used Mariah’s pilfered journal for inspiration. When she shared the piece with Devon, he was so impressed that he arranged for her to sing it on THE HILARY HOUR. Not surprisingly, Mariah recognized the words and publicly blasted Tessa! Afterwards, Devon and Noah quizzed the songbird about Mariah’s accusations, but Tessa doubled down, insisting they were her words! Mariah was upset that neither Devon nor Noah believed her and threatened to sue if Devon published the song. Later, Mariah pushed Tessa into confessing that she’d stolen the journal. When Noah refused to believe it — and asked his sister to drop the accusation because she was hurting Tessa’s career — Mariah gave him the journal to read. Afterwards, a furious Noah broke up with Tessa and refused to forgive his sister for coming on to his girlfriend! Meanwhile, Devon pulled the plug on the song — and on Tessa’s career! Yet he gave her a chance to redeem herself when he hired her for an administrative position at Hamilton-Winters. At Crimson Lights, Tessa approached Mariah to mend their relationship, but Mariah refused, accusing her ex-BFF of ruining what they once had between them!

Ashley and Jack took their battle for Jabot to court… with the judge awarding Jack control of the cosmetics company! Shocked, Ashley wished her brother the best… then resigned! Later, they agreed on one thing — to let Dina visit Abby in Paris. Meanwhile, Victor offered Ashley an executive position at Newman Enterprises, where his ex would report only to him! Not surprisingly, Billy was less than enthusiastic about his sister’s new boss. Victoria was even more upset at her new office-mate, especially when she learned that Ashley would be running Brash & Sassy! Furious, Victoria decided to fly to Paris to check in with Abby. When she learned about Victoria’s trip, Ashley called her daughter to request her support as she put a plan into action! 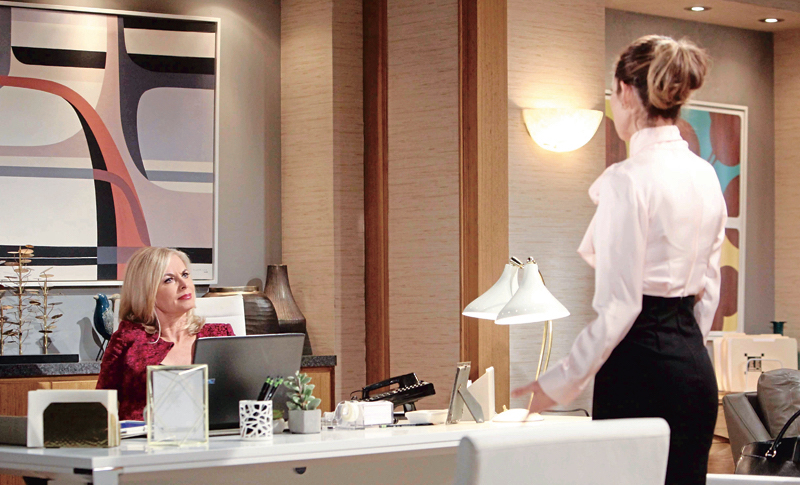 ”This office isn’t big enough for the two of us. Well, I suppose it technically is… but I don’t want to share.” (Photo Credit: Howard Wise/jpistudios.com)

Returning from Paris, Cane moved back in with his family. Of course, that included moving Sam in as well. Lily wasn’t happy to have to share their bedroom with the infant until Sam’s nursery could be built. Meanwhile, Mattie confessed to her mom that she no longer trusted Cane! After witnessing Lily’s difficulty bonding with his son, Cane told Lily that he needed to spend more time rebuilding their relationship. Victoria asked J.T. to move in with her, which didn’t sit well with Billy! After an argument, Victoria promised to be better at balancing work and her personal life!

Phyllis and Billy joined Hilary and Ravi on their blind date, which had Hilary interrogating the young hunk about his life prospects. Billy stunned Ravi when he revealed that Hilary’s biological clock was ticking, and she wanted to find a babydaddy! After observing Ravi’s shock, Hilary declared that she didn’t need a man to pursue motherhood! To that end, she hunted for an egg donor. To pay for the expensive fertility treatments, Hilary sold GC BUZZ back to Devon, which dismayed Mariah, who wound up having to interact with his new assistant, Tessa! Across town, Nick discovered cash hidden in the bathroom vents of the penthouse. Believing it was Adam’s ill-gotten gains, Nick brought the loot to the police. When it was cleared, Nick gave the cash to Chelsea, who donated the money to Nick’s charitable efforts. Meanwhile, Lauren and Phyllis discovered that someone had set up a fake Fenmore website to scam customers and hired J.T. to investigate.