Victoria put her plan to oust Ashley from Newman Enterprises into motion. To that end, the beauty showed Victor the fake evidence that she and Jack had put together which made it look as though Ashley had been sharing company information with Jabot. When The Mustache ordered J.T. to investigate, the sleuth broke into Jack’s office, where he found the planted documents supporting Victoria’s accusation that Ashley had been committing corporate espionage. Not surprisingly, Victor confronted Ashley about the evidence and fired his ex! To ease her departure, the billionaire called Devon to do PR damage control, but Ashley refused to go quietly, threatening Victor with wrongful termination! Later, Billy and Abby vowed to help Ashley prove her innocence. By looking at the Jabot visitor logs and Jack’s phone records, Abby realized he and Victoria had been working together to set up Ashley, which she promptly told Victor. Meanwhile, Victoria gloated over her victory against Ashley… until Victor called her into his office and forced her to confess that she’d lied to him and J.T.! A guilt-ridden Victoria tried to make amends with J.T., who wondered how they could have a relationship if she refused to trust him. Victoria’s bad day continued when Abby called out her actions and vowed that she and her mom were the future of Newman. Unfortunately for Victoria, her sister’s claim appeared to have merit when her dad called her and Ashley into his office. There, Victor told Victoria that she could either resign or accept a demotion at Newman!

Upset over Hilary’s disappearing act from THE HILARY HOUR, Devon blasted his ex… only to later find out that the vixen had begun mentoring a teen named Shauna, and had even paid for the girl’s brother to get into a drug rehab program after he’d overdosed! Later, Devon apologized to Hilary for thinking the worst of her. He also promised to stop threatening to let Mariah take over the show. With their new détente, Hilary suggested that he should help make her dream come true by offering to father her child, even if only as the sperm donor. Devon refused — but later shocked (and delighted) her by agreeing to become a co-parent with her! Understandably, Lily warned Devon that her nemesis was obviously attempting to sink her claws back into him! 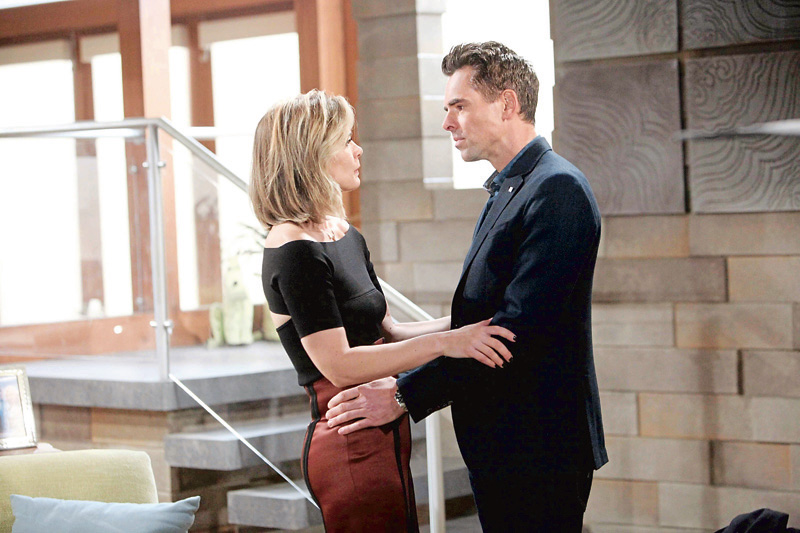 ”Billy, I’d love to argue about my obsession with Nick, but I”m pretty sure he needs me to bring him lunch.” (Photo Credit: Howard Wise/jpistudios.com)

Lily’s relationship with Victoria deteriorated after the boss refused to let her take a day off. When Victoria learned that someone had posted negative comments about her on the Newman employee website, she accused Lily, which prompted the model-turned-exec to storm off! Later, Lily decided to quit Newman and start her own modeling agency, which she hoped Devon might fund. Instead, her brother offered to open the agency under the Hamilton-Winters umbrella. Excited about becoming her own boss, Lily agreed, and hurried home to share the thrilling news with Cane!

Jack and Ashley were horrified when they got word that Dina had wandered away from her nurse in Europe. Thankfully, a social worker found Dina, prompting Jack to race off to London to bring Dina home. Upon returning to Genoa City, however, Dina’s mental health declined to the point where she believed it was her high school winter formal… and Victor was her date! Billy accused Phyllis of being too caught up in Nick’s business. At the GCAC, Nick became suspicious over his mother’s strange behavior during lunch. Nikki confessed that she was staying at the club. Later, Nick decided to check up on his mother… and was shocked to witness her kissing Arturo outside her suite!

Vote for Your Favorites in Our Y&R Anniversary Poll

Kristoff St. John Is Back at Y&R