It looks like Billy might be able to help Victoria save their company in these spoilers from THE YOUNG & THE RESTLESS, but it may end up costing him his relationship with Phyllis! And Faith continues to be a little brat — is there anything Nick and Chelsea can do to make her see sense?

Billy seems to have finally managed to use Dina’s password to discover something on Phyllis’ Jabot computer and he rushes the flash drive straight to the Brash & Sassy offices to share the information with Victoria. “I was able to get into Jabot’s server,” he reports. “They’ve got plans to smash us to bits.” Victoria’s eyes go wide as she wonders what Jack has planned to destroy them completely.

Meawnwhile, Phyllis is not happy about Billy constantly rushing to Victoria’s side every time there’s a crisis. She storms into Lauren and Michael’s apartment and angrily flings her purse onto the couch. “I have so had it with his damn ex-wife,” she hisses, raising her hand. Could all this corporate intrigue be leading to a reunion between Billy and Victoria? 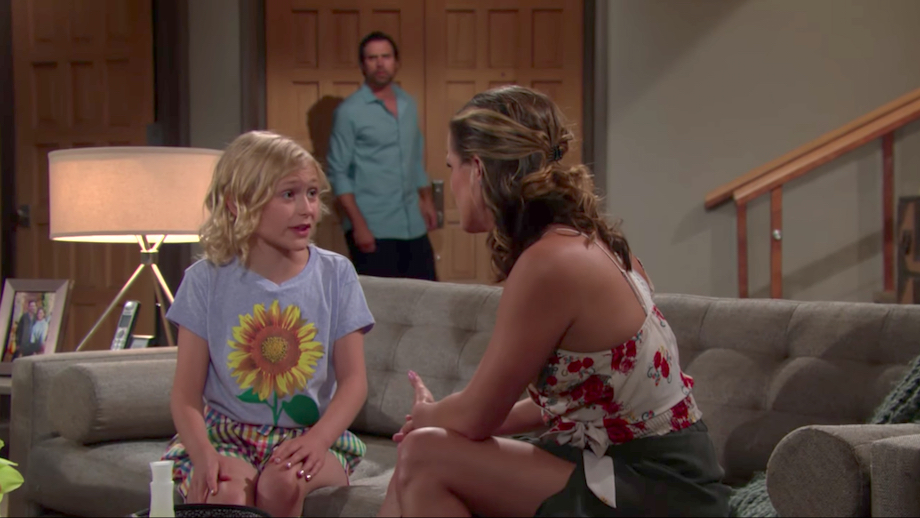 Faith is not shy about voicing her opinion! (Photo Credit: CBS)

Nick comes home to find Faith sitting on the couch with Chelsea giving her a piece of her mind. “I’m smart enough to know when something’s wrong,” the little girl insists. “This isn’t right. We shouldn’t be here!” Nick’s face falls as he realizes he’s still got some work to do with his daughter before she’s comfortable living with him in Chelsea’s place and not at the ranch. Is there anything he can do to get through to Faith?

Michael Muhney Got a New Role — and an Adorable Congratulations From His Daughter!

Everything You Need to Know About Alice Johnson on Y&R

Beth Maitland Brings Traci Abbott Back to Y&R in October