Jack wants to destroy Brash & Sassy, but in these spoilers from THE YOUNG & THE RESTLESS, Victoria is not going down without a fight. But can she and Billy really find the ammunition to fire back at Jabot before their company is put out of business?

Billy stole Dina’s Jabot password but hasn’t been having any luck making it work so that he can get into the rival company’s private business files. However, at the office, Victoria notes that Billy has something up his sleeve to retaliate at Jack, and she wants in. “I don’t want to punch back,” she informs Billy. “I want a knockout blow. So… what’s your shady idea?” She glances at his computer where he has once again failed to get into Jabot’s system, but can’t see what’s on his screen. Will Billy let Victoria in on his scheme, and is there anything she can do to help?

Meanwhile, over at Jabot, Jack takes Phyllis to task for literally sleeping with the enemy — Billy! “You should want all or nothing,” he declares angrily. “Victoria is pulling out all the stops.” Phyllis is caught in the middle of this war between Billy and Jack and eventually, she’s going to have to pick a side and stick with it! 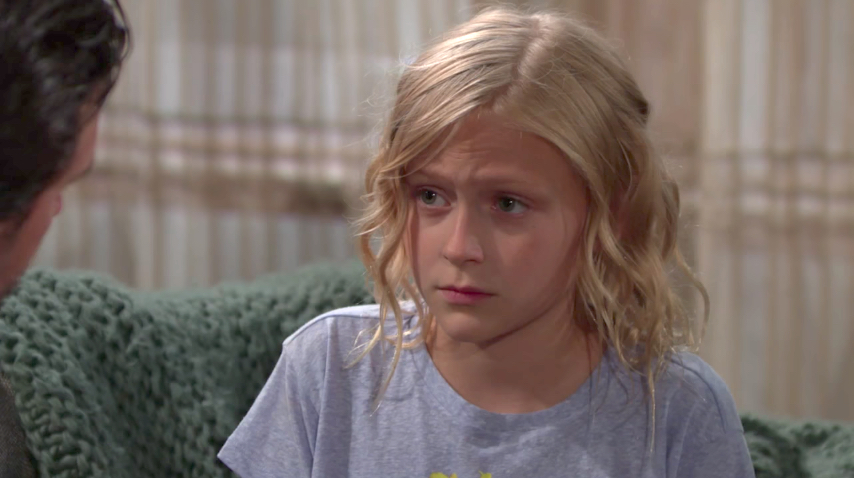 Faith has no idea she’s being used as a weapon. (Photo Credit: CBS)

MUST SEE: Melissa Ordway Reveals She’s Having a Baby Girl!

Nick has brought Faith to the penthouse where he’s now living with Chelsea, but the little girl doesn’t seem entirely enthused with her dad’s new living situation as he tries to get her to settle in. “Right now, I want to see Grandpa,” Faith admits. But Nick has some bad news for his daughter. “That’s… not gonna happen,” he admits. Faith frowns and looks confused. Will the kid end up as collateral damage in the war between Victor and Nick?