Victor may be down but he’s definitely not out in these spoilers from THE YOUNG & THE RESTLESS!

Nick happily took Victor up on his offer to slug him if it would make him feel better, but unfortunately, as he sent his father reeling, Faith walked into the barn and was absolutely horrified by what she saw! “Faith, there’s nothing to worry about,” Nick assures his panicked daughter. But the little girl doesn’t understand what’s going on. “Then why did you hit grandpa?” she cries as Victor dusts himself off and glares at his son. Can Nick find a way to keep Faith away from Victor without actually explaining why he feels its necessary?

MUST SEE: Y&R’s Melissa Ordway Took Her Daughter to Visit the Easter Bunny and the Results Were Too Cute For Words! 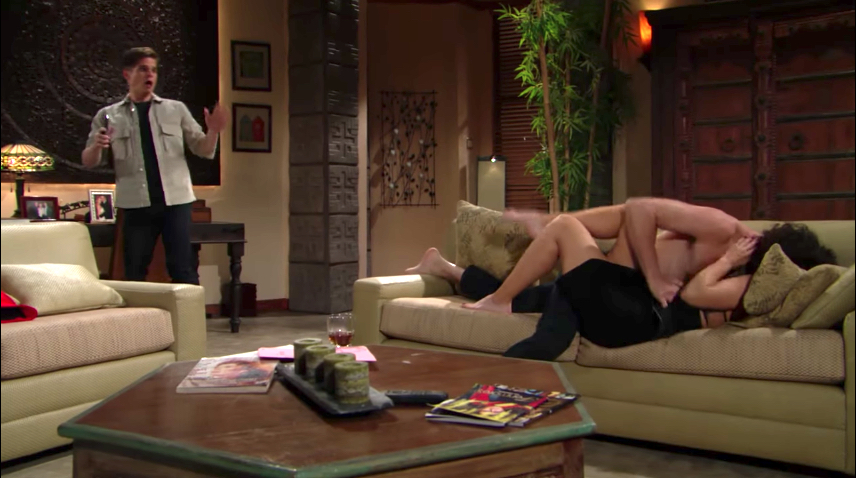 Kevin got quite an eyeful! (Photo Credit: CBS)

After downing quite a bit of scotch, Scott and Phyllis got a little hot and bothered, so Kevin gets quite a shock when he walks into Lauren and Michael’s place find the pair half-naked and wrapped around each other on the couch! “Woah!” he shouts, averting his eyes. “Sorry, sorry… yikes!” Phylis scrambles out from underneath Scott and turns away to cover herself as Scott just looks annoyed.

Over at The Underground, everyone has gathered for Reed’s 16th birthday party. But Billy can tell that Victoria is distracted and concerned about something that has nothing to do with her son’s bash. “I know that you didn’t work with Chloe,” Victoria assures her ex. “That’s not who you are.” But Billy remains concerned for her. “So why don’t you tell me what is going on?” Does she trust him enough to confide in him the big secret she’s being forced to keep?

Michael Muhney Shares a Heartfelt Message With His Y&R Fans!