Hattie has pulled off her switcheroo with Marlena, but in these spoilers from DAYS OF OUR LIVES, her plan has already started to hit a snag. And that snag is a particularly suspicious John!

John is initially delighted to reunite with the woman he loves, bringing Marlena a bouquet of flowers and giving her a warm embrace. But then she leaves him stunned when she announces, “I’m not going home with you.” Thrown, John doesn’t understand what’s going on with her and why she’s acting so strangely. “This is not you, Doc,” he declares. As Hattie nervously tries to convince John that she’s really Marlena, he wonders, “What the hell is going on?” Is there any way that Hattie can pull off this deception, especially with the man who knows Marlena best? 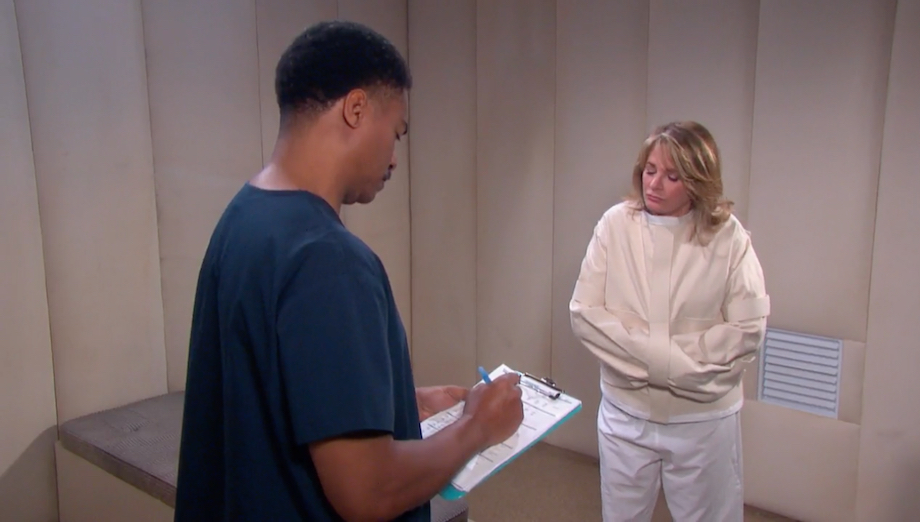 Marlena’s not a fan of her new digs! (Photo Credit: NBC)

Meanwhile, at the hospital, the real Marlena has woken up to find herself trapped in a padded cell and wearing a straightjacket! Struggling against her restraints, the psychiatrist attempts to remain calm and collected so her claims will sound believable. “I am Doctor Evans,” she insists to the orderly taking down her information. “Hattie switched places with me!” But can she convince anyone that she’s telling the truth or will everyone at the hospital just assume she’s just another deluded patient?

Who Was Ava on DAYS?