Anjelica may be out of the picture, but Hattie and Bonnie are continuing their own plans for revenge in these spoilers from DAYS OF OUR LIVES. But as Bonnie tries to settle into the Kiriakis mansion with Justin, Hattie plots to eliminate John and Marlena once and for all!

Still posing as Marlena, Hattie phones up the hospital to ensure that John and Marlena won’t be able to expose her anymore. “Follow the next phase of treatment,” she says into the receiver. And when the orderly enters Marlena’s rubber room, he informs the patient that she will be treated with electroshock therapy! Marlena’s face falls and in the neighboring room, John overhears the news and throws his head back in frustration. 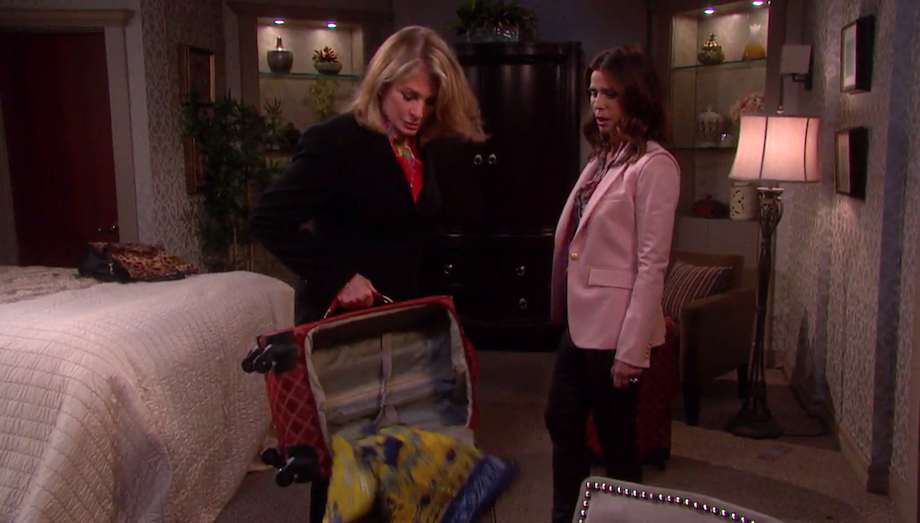 However, Hattie’s no brain trust, so scheming on her own was never likely to go according to plan! When Hope tries to talk to the woman she believes to be Marlena, both women are startled when “Marlena’s” suitcase falls open and garish, Hattie-style clothes come falling out onto the floor! Confronting Hattie, Hope demands the truth. “Tell me what you did with John and Marlena,” she asks the tearful doppelganger.

But as John and Marlena struggle against their bonds while a nurse places electrodes on their heads and prepares to administer electroconvulsive therapy to John’s skull, the pair may be running out of time! “Please don’t do this!” Marlena begs. Can Hope rescue them before permanent damage is done?