Jack was furious when Jill blocked him from having Phillip’s body exhumed so he could run a DNA test. Meanwhile, Kyle believed Ashley was thwarting his career ambitions when she quit Newman and returned to Jabot. Irritated, the hunk got plastered… then dug up Phillip! Upon hearing noises, a freaked Esther called the police, who promptly arrested Kyle. Kyle charmed Esther into dropping the charges, then shocked Jack by showing him the bone fragment he’d stolen from Phillip’s grave! Though initially reluctant to use the pilfered piece, Jack eventually gave Kyle the green light to have a secret DNA test done. They received the results just as Jill stormed back to town and raised hell over the lack of respect shown to Phillip’s grave!

Billy schemed to win the Jabot yacht back in yet another game, but then had to do some fast talking to stop Phyllis from throwing a party on the no-longer-there yacht! Summer jumped in to prevent Phyllis from finding out about Billy’s nefarious activity. Alas, Phyllis caught her beau in a lie and, believing he was cheating on her, hired a P.I. to keep tabs on him. Meanwhile, Billy’s gambling woes deepened to the point that he was forced to cover his losses by fiddling with Jabot’s budget! When the P.I. revealed he’d tracked Billy to a suite at the GCAC, a devastated Phyllis hurried over to confront him… only to discover he’d been gambling. After blasting him for lying to her, Phyllis returned home to confront Summer for having kept Billy’s secret! 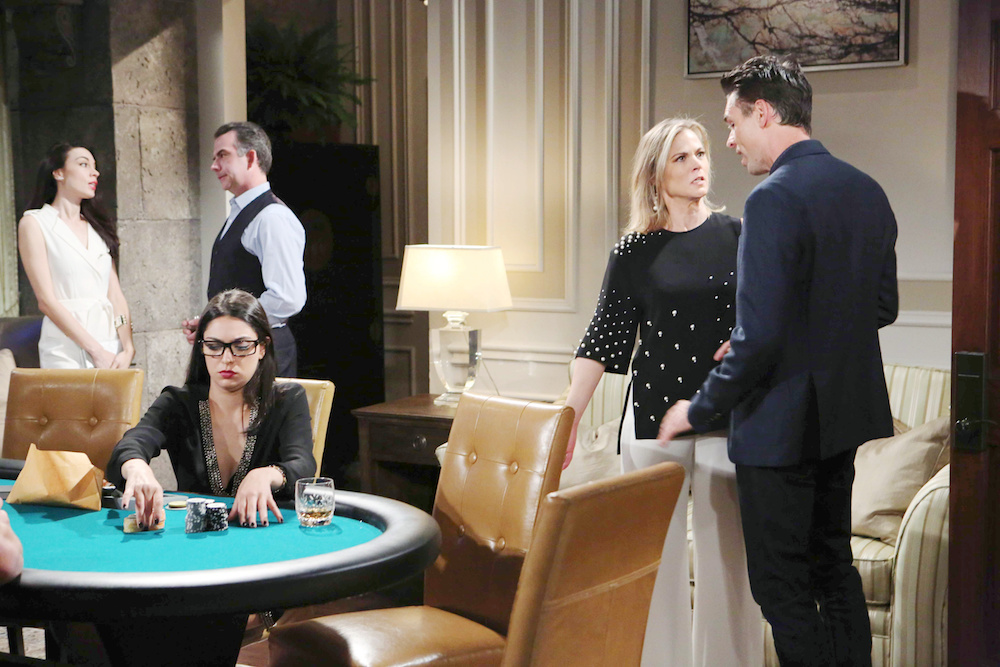 ”You may have won money, but you’ve lost me, buddy!” (Photo Credit: Howard Wise/jpistudios.com)

Victor fired Neil after learning that his former right-hand man was doing work for companies that had defected from Newman. Despite her father’s current headaches, Abby wanted to confront him about Arturo’s bad luck, but Nikki barred her from seeing Victor. Nikki also kept mum that she was actually the one behind her ex-lover’s problems! Feeling overwhelmed, Nikki sought comfort from Sharon. Alas, the two women were rocked when they actually saw J.T. skulking around the ranch! Temporarily unable to find Victor and fearing he’d been kidnapped by J.T., Nikki — upon her hubby’s return — realized how much she loved him and moved back into their bedroom. Fed up with the J.T. situation, The Mustache made plans to meet his former son-in-law, which sent Victoria into a panic. Sharon put aside her own anxiety over J.T. to celebrate with Nick when he won custody of Christian. Across town, Ashley and Neil got closer, even sharing a passionate kiss, but decided not to ruin their longtime friendship with a romance. Kyle persuaded Mariah and Tessa they should go on a date and see what happens. Olivia’s son, Nate, returned to town and immediately got on the wrong side of Hilary. After catching Shauna and Charlie alone together, Lily verbally attacked Hilary, causing a distressed Shauna to run away!