Viewers of THE BOLD & THE BEAUTIFUL were treated to an explosive Friday cliffhanger — literally— when Bill set off the charges to demolish the Spectra Fashions building not realizing that Liam and Sally were still inside! And after the dust settled, it became a race against time to dig through the rubble and find out if either of them survived the blast! 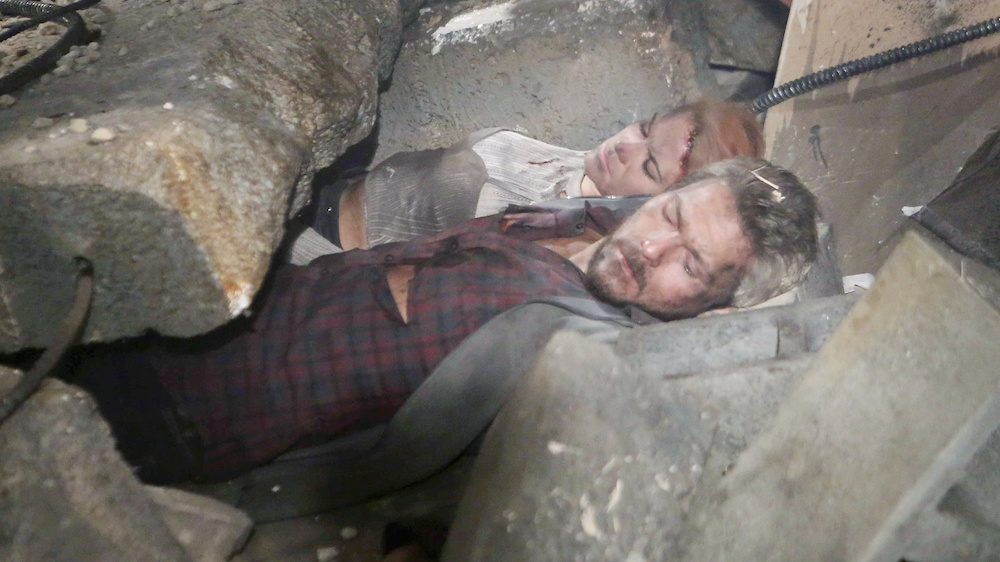 Sally and Liam were laying down on the job! (Photo Credit: Howard Wise/jpistudios.com)

Fans were swept up in the drama of the episodes as Bill and Steffy scrambled to rescue Liam and Sally even as the two friends trapped under the weight of a collapsed building discovered that they could possibly be more than that, sharing a kiss! But a lot of work went into creating the reality that immersed viewers into the action, from set design to makeup to special effects.

Scott Clifton offered fans a Liam-eye view from under the rubble as he panned around with his phone to capture the crew working hard to set up the next shot. His lens lands on co-star Courtney Hope (Sally), who joked that she was “just hangin’ out” as she lay next to him waiting for their cue. The actor shared it to his Instagram and you can see it for yourself by clicking on the arrows to scroll through a couple behind-the-scenes photos — the video is the third part of his post!

The two actors also shared more photos on their social media giving fans a look behind the curtain at the work that goes into creating such exciting television and you can see them below!