Soap fans are notoriously loyal, and Ashley Jones appreciates that tremendously, especially since many are eager to see her back on GENERAL HOSPITAL as Parker. And the actress herself confided to Soaps In Depth that she is also looking forward to continuing to tell Parker and Kristina’s story!

“I didn’t think that people would invest as much,” Jones admitted of the unlikely romance between student and teacher. “And they invested more than I think even the writers thought they would. They really want to know what happens to these characters. It’s amazing. But it’s also frustrating for me because my hands are tied at a certain point.”

Allowing that there are a lot of moving parts to making a daytime drama like GH with the scheduling and the storylines and actor availability, Jones still felt that Parker and Kristina’s October exit from Port Charles was a little abrupt. “You don’t love something like that as an actor when all of a sudden you feel a little shell-shocked,” she confessed. “You do the best you can, and I think we did and we gave a lovely arc for this character and for Kristina. I do think that there’s more story left to be told. I’m not going to lie about that.” 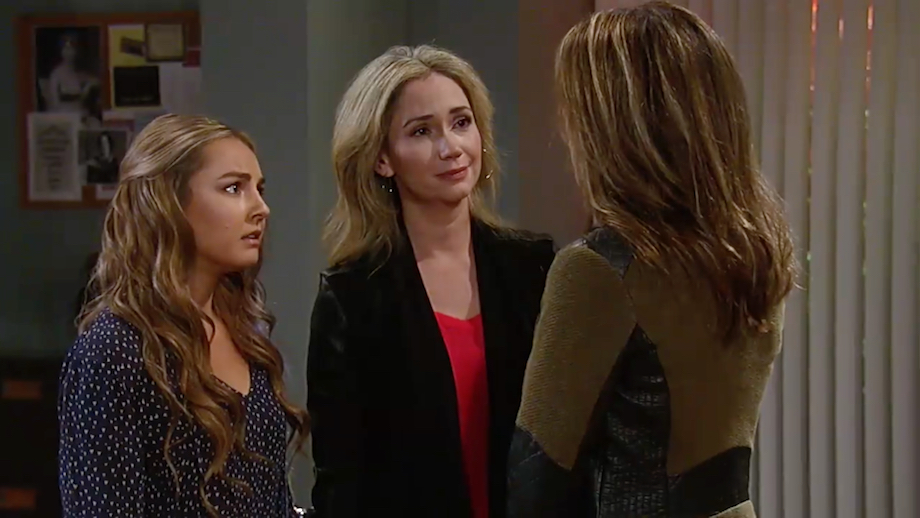 Kristina left town to be with Parker, much to her mother’s dismay! (Photo Credit: ABC)

Jones understands the difficulties but hopes that for the fans sakes, and also for her and co-star Lexi Ainsworth, that Parker and Kristina’s story will come back to the canvas sooner or later. “I trust the writers,” she insisted. “I trust [GH executive producer] Frank Valentini. I think he really knows what he’s doing. There are reasons behind everything. And I’ve been on the other side of it. Not in daytime, but when you’re producing a show, there’s so many things to consider. So you don’t take it personally. You do the best you can, and if they have a story to tell and you’re available… I’ll never say never.”

After making her debut as Parker in January of 2016, Jones appeared sporadically into the spring, then disappeared until a year later when she returned in August. But that run also featured only sporadic appearances until Parker left town with Kristina in October. “I don’t know what they’ll do next,” the actress admitted. “You know, the first time we didn’t see Parker for a while, it was a year, and then she came back and had this great run. They have their reasons for everything. I trust them. I know that they value Kristina and Parker and the actors, and when it makes sense, and if it makes sense, we’ll be back!”

Rebecca Herbst Looks Back at 20 Years on GH With Tons of Classic Photos!