In the wake of Julian’s beating, Scotty begged Alexis to visit her ex-husband in prison and offer him hope of a reconciliation, if only so that he’d stop putting himself in danger. Don’t you dare do it, Diane advised her friend. But, of course, in Alexis’ mind, she was already halfway to the jailhouse. Once there, her concern for Julian increased tenfold. And, after he received an ominous warning — because so rarely are cheerful warnings issued! — Alexis tried to obtain via Olivia’s attorney, Nora, a statement from Julian’s sister exonerating him. She even went so far as to threaten to tell Sonny that Valentin was footing Nora’s bill if Nikolas’ murderer didn’t have the Llan- view lawyer relay her message to Olivia!

After Sonny bailed out Klein, the Mob boss and Patient Six grilled the doctor like he was a burger on the Fourth Of July. Still, he insisted that he didn’t know his boss’ name. Just then — quelle coïncidence! — el jefe called. Upon sending Klein’s cell to Brick, Sonny learned that the Big Kahuna was in Port Charles!

Patient Six and Jason Are Brothers

As everyone wondered whether Jason was Jason or Patient Six was Jason, Curtis turned up Andrew’s death certificate. Finally, Franco told Jason and Sam about the twin… but he neglected to mention that the document was a fake! Later, while Patient Six got filled in by Elizabeth, Jason realized that Betsy had skipped town. Then he came home to find Sam and Scout with Patient Six and flipped out. Before the situation could escalate, Sonny, Carly, and Jordan arrived with DNA- test results that confirmed that Jason and Patient 6 were twins. Again, Franco was questioned — that didn’t take long! — and this time, he confessed that okay, fine, Drew is alive. But then he went and burned the evidence that would have ID’d the real Jason, because he believed that doing so would keep the twins away from his girlfriend. Sam, meanwhile, told the siblings to start getting along. Good luck with that — since Patient 6 had just hired Diane, there were obviously no bro hugs in the immediate offing! Andre would know the truth, Anna and Jordan deduced. Alas, the suddenly-shady shrink had already acquired a new identity. 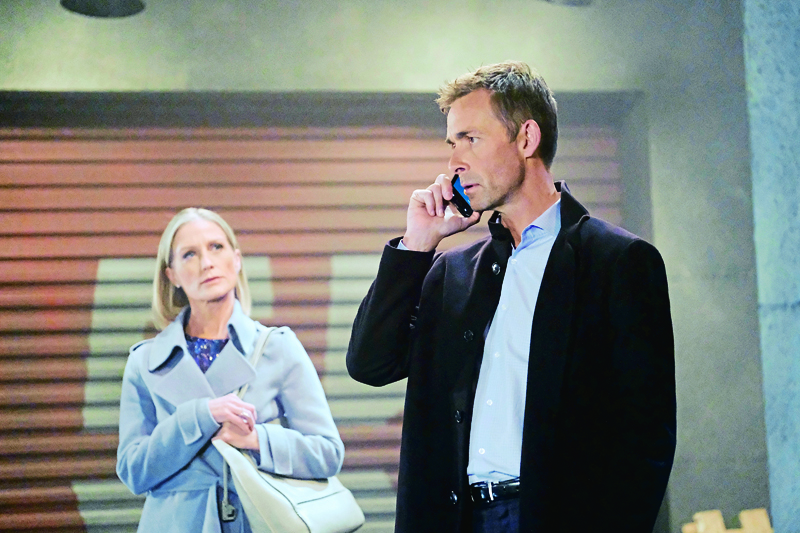 ”I can speak freely. Cassandra is whole inches away.” (Photo Credit: ChrisD/jpistudios.com)

Though Nelle made peace with Michael — sorta — she utterly failed at blackmailing Valentin. So she showed Nina the photo of him kissing Cassandra… only to have her boss realize that she’d taken it weeks ago. After firing the schemer, Nina went to her husband, who at last told her all about Cassandra. While Nina decided to keep her new enemy close, Finn handled a few opioid overdoses at GH and became more committed than ever to helping Anna build a case against the drug lord. Valentin, too, swore to bring down his old colleague… by going to work for her!

After helping Maxie finish her Man Landers story for Crimson, Amy learned that brother Chet was one of the opioid addicts that Finn had saved. When Nathan couldn’t get through to Chet as Man Landers, he and Amy wondered whether they should reveal that she was really the advice guru. Overhearing, Nelle plotted to sell the story of Man Landers’ true identity! Meanwhile, Lulu realized that Maxie hadn’t thrown up on the article she submitted to PC Parents because it was awful but because she was pregnant.

Oscar and Josslyn Get a Clue

After Ava learned that Patient Six had gotten the formula for her treatment from Klein, she had Dr. Bensch and Griffin review the regimen. It was promising, they agreed, but dangerous. Lastly, Oscar and Josslyn listened to music that they believed his mysterious father had sent his mother.