Knowing that his wife had strong reservations about his upcoming business trip to San Francisco with Sally, Liam laid down clear boundaries with the redhead about the nature of their venture. Bill, however, voiced his concerns to Steffy about the way Liam had been treating her, thinking it wasn’t very respectful. Liam made a point to reassure Steffy by elaborating on the measures he’d taken to prove his devotion to his marriage, but Bill privately suspected that his son was harboring romantic feelings for his new “investment,” especially after Justin filled him in on how Liam was continuing to spend Spencer funds. Steffy warned her husband that if Brooke left Bill for good, Liam might face the brunt of his dad’s ensuing wrath.

Eric hired a new estate manager named Mateo to help oversee the Forrester property, but when this new employee came to Quinn’s aid in an entirely different capacity, his role at the home changed… to personal masseuse! As Mateo got comfortable in his new upper-crust surroundings, Sheila took advantage of his new position with the Forresters to further her plan to take down Quinn. Eric later took Mateo aside to give him a stern lecture about trust. After Charlie discovered the portrait that Sheila’d had painted of herself, he assured the loon that it would never hang in the Forrester mansion. 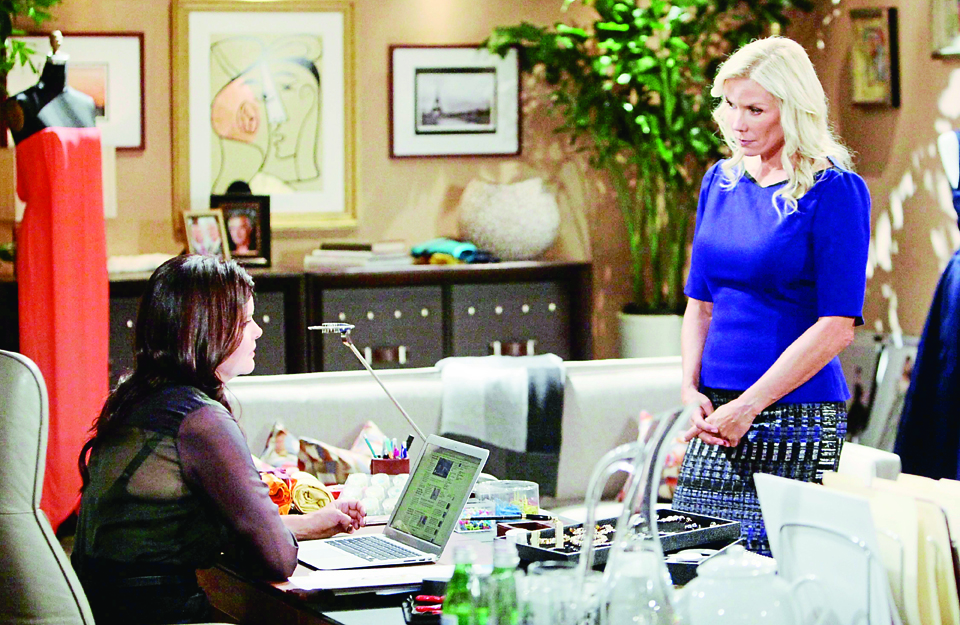 ”Don’t lie to me, Katie! The results of the Facebook quiz I just made you take prove that you’ve either taken a lover or adopted a puppy.” (Photo Credit: Howard Wise/jpistudios.com)

Brooke gave Katie the third degree upon noticing that her sister seemed so much happier lately. Brooke wondered if Katie’s contentment might be the result of a new romance and wondered who the man in question might be. Meanwhile, convinced that Wyatt had been single for far too long, Quinn set about finding him a suitable new woman. Wanting to spend a little time together, Wyatt and Katie skipped work so that they could indulge in some afternoon delight. Unfortunately, their alone time didn’t go quite as either of them had planned!

Though Bill barged into Ridge’s office to warn him that he’d better stay out of his marital issues with Brooke, the designer felt smugly certain that it was only a matter of time before the blonde severed ties with the publishing magnate completely. R.J. got his hopes up about his parents’ eventual reunion when Ridge informed him that Brooke had moved back home. Having given serious thought to her future, Brooke agreed to meet with Bill to discuss their differences — and whether or not they had a future. Refusing to give up on her, Bill promised that he would mend fences with Liam and start repairing his broken family. During a conversation with Ridge, Brooke remained reluctant to reveal any information about what had caused her to walk out on her husband.