Wyatt called a “time out” in the middle of Liam’s wedding to Hope to explain that Steffy’s recent betrayal was just another one of Bill’s hoaxes. The bride was devastated, discouraged, and uncertain about how (or whether) to proceed with the nuptials. As Liam struggled to control the anger he felt bubbling up to the surface, Hope made the decision to put their wedding vows on ice — at least for the time being. The fact that Wyatt hadn’t called with news about the wedding made Bill anxious, and he ordered Justin to reach out to Donna for the 411, a request Justin refused. In the meantime, a giddy Ridge texted Steffy to let her know that Liam might not be getting hitched after all!

Liam Was Back Where He Started!

Brooke was heartbroken for her daughter, while Ridge was relieved that his stepdaughter had slammed the brakes on her nuptials. Bill saw red when Wyatt revealed that he’d ratted him out to Liam, but Wyatt was unflinching in the face of his father’s rage. Realizing she still had a shot with Liam, Steffy begged him to go back to the moment before Bill’s interference — and to forgive her. Liam felt torn where his loyalties to the two women were concerned. Despite having almost said “I do” to Hope, he wondered if he maybe ought to reconsider Steffy again! Undeterred by Steffy’s claim that she wanted nothing further to do with him, Bill stormed over to her house, hoping this would be the visit where she finally admitted to being madly, hopelessly in love with him. Alas, it didn’t turn out that way! 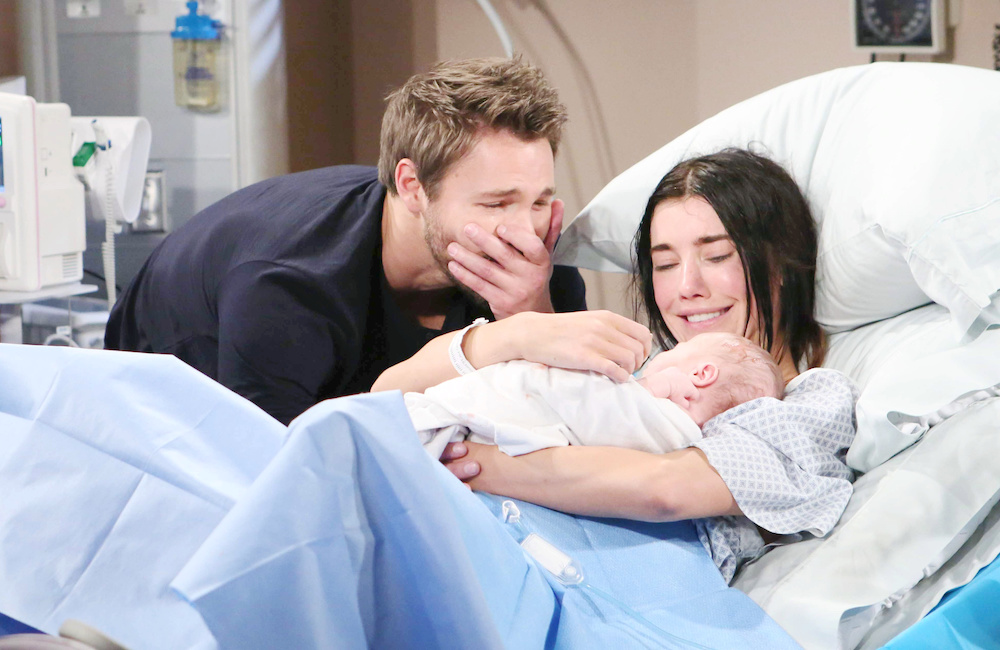 ”Oh no! He has my nose!” (Photo Credit: Howard Wise/jpistudios.com)

After slamming the door in Bill’s face a bit too forcefully, Steffy faltered on her feet and took an awful spill, one that sent her into premature labor. Frantic, she phoned Liam to let him know about her accident, and he raced to the hospital to be with her. There, Steffy labored with a supportive Liam by her side, as Ridge paced the hallways in a panic. Back at Forrester Creations, Hope, Eric, Brooke, Thorne, Quinn and Pam all fretted as they awaited news of Steffy’s (and the baby’s) condition. Dr. Phillips told Steffy she must give birth as soon as possible, because the fetus’ heart rate was plummeting at a dangerously rapid rate! When the baby girl was delivered and ultimately deemed okay, Liam and Steffy bonded over their daughter.

Liam Made His Choice

Ridge was overwhelmed to meet his granddaughter, and he urged Liam to think about Steffy and their new family and make the right decision for their future. Liam carefully weighed Ridge’s advice, but also seethed with rage over the fact that Bill was responsible for sending Steffy into early labor. Steffy headed home from the hospital, still not knowing whether Liam would ultimately stay with her and the baby. When she got to the house, she found Liam waiting there with big news. Meanwhile, knowing that Liam was overjoyed by the birth of his and Steffy’s child, Hope reflected on the reality of the situation and what it meant for her own romantic future.

When Brooke took Wyatt to task for not speaking up until the middle of Hope’s wedding ceremony, Quinn rushed to her son’s defense and urged him not to blame himself for his father’s duplicity. Despite being on opposing sides of the “Who should Liam be with?” debate, Ridge comforted Brooke in the aftermath of Hope’s botched wedding. Ridge admitted to Thorne that it had been tricky to navigate the sticky situation with Steffy and Hope while still respecting his wife’s opinion. The men speculated about whether or not Liam and Steffy might actually have a future together after all.

Should Brooke and Bill Stop Meddling in Their Kids’ Love Lives? — Vote Now!

Don Diamont Opens up About His Blended Family Life