When Thorne showed up at Forrester Creations for the first time since returning home, Eric was thrilled to catch up with his son, and even more excited to discover that he had developed a new passion for designing. Eric filled Thorne in on some of the family gossip from the past year, but when pressed for information as to why Ridge and Brooke had called off their engagement, the patriarch refused to go into detail.

Ridge Is Not Impressed!

Ridge was miffed to discover that Thorne had taken up residence in Brooke’s home and now fancied himself a “designer.” Eric, Quinn, and Brooke had to intervene when the two men butted heads at the office, and Brooke took Ridge to task for treating his younger brother too harshly. After she left with Thorne, a frustrated Ridge vowed that he would relieve Brooke of her “babysitting” duties. Over lunch at Il Giardino, Thorne boldly suggested to Brooke that perhaps she should be with him instead of Ridge! Of course, Ridge arrived shortly thereafter and escorted Brooke away from Thorne and back to the office.

Steffy felt strongly that she must come clean with Liam about the night she’d spent with Bill, but she grappled with how best to explain it, knowing her husband was unlikely to let bygones be bygones where this incident was concerned. Ultimately, she and Bill agreed that it would be best if Liam never found out, and they made a pact vowing to keep the secret. Steffy’s guilt surfaced, however, when Liam questioned her about where she’d gone the night she’d walked out on him. Steffy responded with a lie, which filled her with anxiety, and rightly so, for when Quinn later innocently told Liam about the bracelet his wife had left at the Forrester guest house, he suddenly had cause for suspicion! 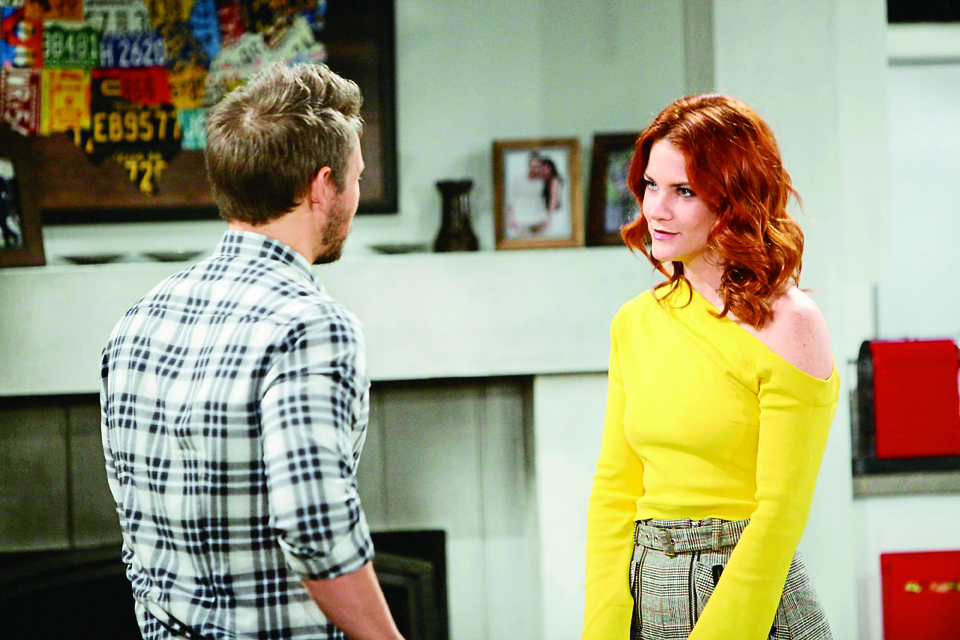 “Liam, I’m just a girl, standing in front of a boy, asking if he might be thinking of leaving his wife.” (Photo Credit: Howard Wise/jpistudios.com)

Does Sally Have a Shot With Liam?

Though Coco questioned her sister’s motives, Sally paid Liam an unexpected visit to find out just how he was doing in the aftermath of his marital troubles. Liam assurances that he and his wife were more committed to each other than ever seemed a bit forced to the redhead. In fact, she wondered if Liam was trying to convince her… or himself! During what was an already uncomfortable conversation, Sally added to the inherent awkwardness when she bluntly asked Liam if his “marital bliss” was all just an act!

Having witnessed Ridge and his brother’s tense interaction over lunch, Sheila approached Thorne later and told him about the almost-affair be-tween Ridge and Quinn. Though he initially doubted her version of the facts, when Eric confirmed it, Thorne felt further compelled to put Ridge in his place, both personally and professionally. Though Eric pleaded with Thorne to drop his vendetta against Ridge, Thorne had too much bitterness and resentment built up to let it go. When he next encountered Ridge, their animosity led to a physcal brawl!

A First Look at Annika Noelle as B&B’s New Hope!