Liam pays a visit to Bill in these spoilers from THE BOLD & THE BEAUTIFUL, but while it starts off calm, it’s definitely not going to stay that way for long! And meanwhile, Steffy’s secret is starting to leak out. No, not that one, the other one!

Devastated to learn that his wife had slept with Bill and that’s why she had to do a paternity test to confirm the father of her unborn child, Liam’s sorrow soon turned to rage as he angrily declared that he hated her and Bill. But he’s all steely calm when he arrives at Spencer Publications, and Bill has no idea what he’s in for as he presents his son with the deed to the cliff house. “The house, it’s yours,” he announces happily before joking, “along with the property tax, of course!” The silence hangs heavy as Liam looks down at the papers and then up at his father. “Does that seem like a fair trade?” he asks finally, setting the stage for an epic confrontation. This is just the calm before the storm, so be prepared for everything to blow up! 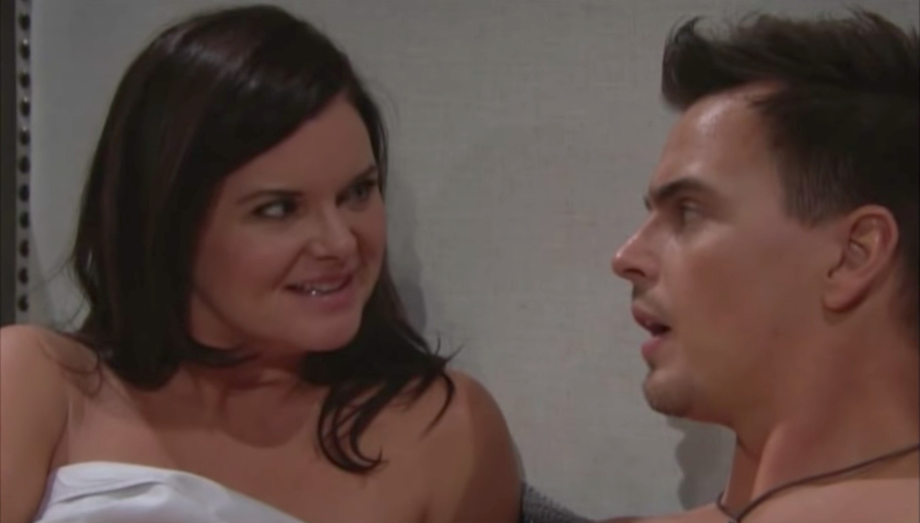 Katie figures out what Wyatt’s been hiding! (Photo Credit: CBS)

Wyatt is apparently not very good at keeping a secret because after making love with Katie, their pillow talk leads her to figure out Steffy’s condition! “Are Liam and Steffy pregnant?” she asks, delighted. Will Wyatt come clean and confirm the happy news? Because while Wyatt can share the news of Steffy’s pregnancy, he’s sadly unaware of Bill’s involvement in that miracle and how it’s going to tear the Spencer family apart forever!

The True Story of Bill and Steffy’s Tortured Relationship