A lot can happen in a day on THE YOUNG & THE RESTLESS, so it’s easy to get lost. If you’ve missed anything that happened over the last week or so on the soap, our recaps will help you get back up to speed in no time!

Victor fought with J.T. after catching him rifling through his study. The scuffle ended with The Mustache taking a header down the stairs! After J.T. fled, an inebriated Jack arrived. Instead of helping the unconscious Victor, Jack rifled through his rival’s study! On his way out the door, Jack had second thoughts and called for help, with Victor being whisked to the hospital! Ashley visited her ex, and was shocked when Victor woke up. She begged him to name his attacker. Victor asked for Victoria, then lapsed into unconsciousness and was rushed into surgery! Across town, J.T. pressured Victoria into announcing their engagement. But she refused to do that until he was officially divorced from Mac. Motivated, J.T. agreed to Mac’s custody terms to speed up their divorce. Still, Victoria persuaded J.T. to attend couple’s counseling before they tied the knot. After a few sessions, she had second thoughts about remarrying the hunk, prompting J.T. to undermine her confidence to get her under his thumb again! Meanwhile, J.T. freaked when he learned Victor’s medical condition was improving. During a private moment, the sleuth disconnected Victor from life-support, causing the billionaire to flatline! Thankfully, the doctors revived the tycoon, and J.T. was relieved that Victor couldn’t speak or move! In an attempt to control Victoria, J.T. leaked news of her demotion to the public and used her embarrassment to whisk her and the kids to Hawaii. Unbeknownst to Victoria, J.T. had no intention of returning to Genoa City! 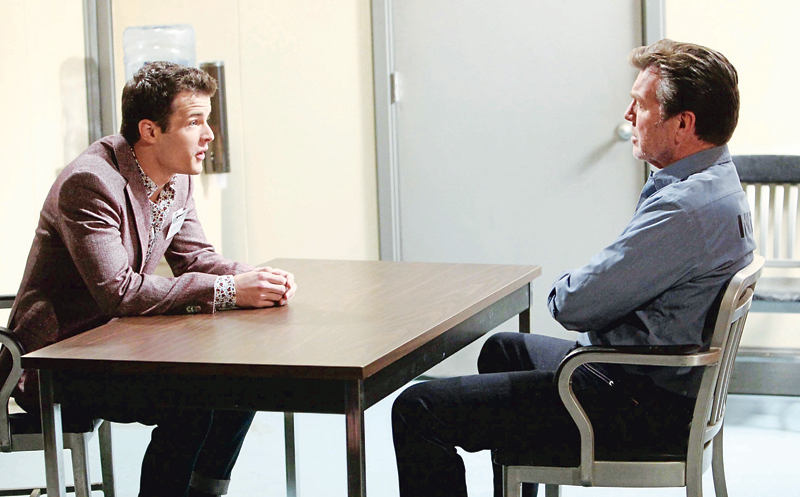 Kyle proved to be a chip off the old block… much to said block’s disappointment. (Photo Credit: Howard Wise/jpistudios.com)

Despite helping Victor, Jack was arrested for attacking the billionaire! While in jail, Jack was visited by Kyle, who listed all of his grievances against his dad. In fact, Kyle was unrepentant about his alliance with Victor and revealed his plan to take over Jabot! To that end, he installed himself in the CEO office. When Ashley arrived, he told his aunt that he’d returned to make things right with his father and keep Jabot afloat. Yet when Ashley shared the news with Jack, he warned her to protect the company from his son! Kyle bonded with Dina, but was unaware that the mystery man she kept referring to was Jack’s biological father. At Jabot, Kyle fired Gloria upon realizing she was loyal to Jack. Ashley sought Abby’s assistance in blocking Kyle from moving into the mansion. Of course, that didn’t stop Kyle from launching his plan to take Jabot public, which meant spinning off Fenmore’s. Understandably, Lauren was thrilled to regain complete control of her company again, and warned Phyllis — who shared the news with Billy — that she expected her to vote in favor of Kyle’s scheme!

Hilary was on a high after making love with Devon… until she realized that he planned to continue seeing Simone. Of course, that didn’t stop the vixen from gloating to Lily that she and Devon had gotten together in the biblical sense! Next, Hilary used Kyle to try and make Devon jealous!

Sharon confided to Mariah that she and Nick had nearly made love, and she was conflicted about her feelings for him. Later, Sharon decided to take control of her life by going on a date… which had Nick battling the green-eyed monster! When Nick confided that he’d kissed Sharon, Phyllis warned that Sharon might be using him to regain custody of Christian! At the GCAC, Abby was charmed by Arturo, who lent a sympathetic ear to her complaints. At the dedication for the gardens dedicated to Katherine, Nikki and Jill fought for the spotlight… then fought each other! Nick became suspicious after seeing a mystery woman fleeing Victor’s hospital room.

Everything You Need to Know About Watching the 2018 Daytime Emmys