Lives hang in the balance in these spoilers from THE YOUNG & THE RESTLESS! Victoria has landed in the hospital while Scott has landed himself in hot water with the law! Can either of them survive their ordeals?

After Zack drugged his beer, Scott passed out and woke up in a motel room covered in blood laying in bed next to a dead woman! Although it’s clearly a set-up because he’d gotten too close to busting the sex ring, there’s not a lot Scott can do about it because Paul and the cops suddenly come busting in through the door! “Freeze!” Paul shouts as another officer grabs Scott from behind to push him to the ground and cuff him. “Face down on the floor! Do it!” Is there any way Scott can possibly prove his innocence? 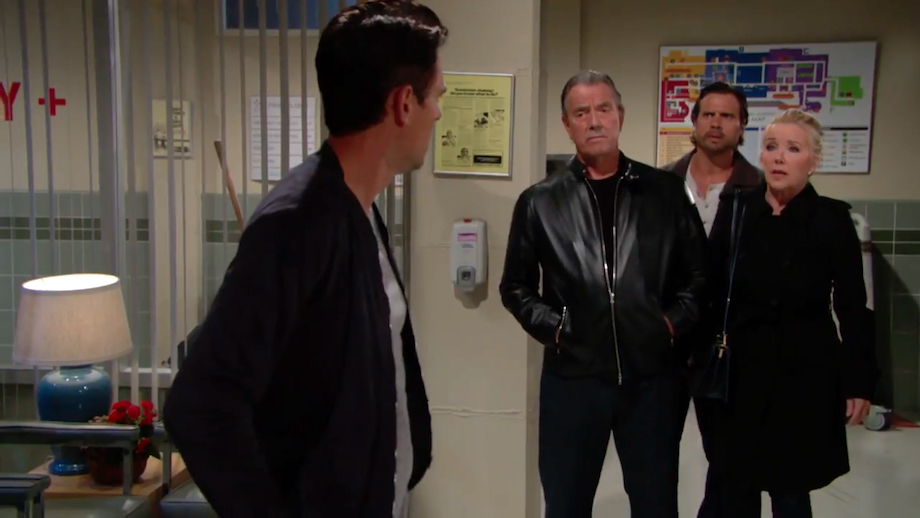 Victoria has been acting oddly ever since she hit her head, and when she passed out on air at GC Buzz, Billy naturally rushed her to the hospital. As he stands in the hall waiting for news on her condition, the rest of Victoria’s family arrives. “What did you do to my daughter?” Victor asks. Nick demands: “Billy, what the hell happened?” And Nikki begs: “Please tell me she’s okay.” Did Victoria hit her head harder than anyone thought, or is something else going on with her?

Jack is determined to find Dina and rescue her from Graham and Ashley wants in. “Graham is desperate,” he warns. “This could get ugly.” But Ashley isn’t about to take no for an answer. “I don’t care what you say,” she insists. “You’re stuck with me.” But even if they team up, will it be enough to get Dina away from Graham?