Someone is going to pay for sabotaging Brash & Sassy by poisoning the face masks in these spoilers from THE YOUNG & THE RESTLESS! The only question is, who? Jack is Billy’s prime suspect, but could someone else be responsible?

After Victoria ended up in the hospital from sampling Brash & Sassy’s new line of face masks, everyone was shocked to discover that they had been poisoned! Naturally, Billy’s first instinct is to blame Jack, who has made no secret of his desire to do whatever it takes to sink Jabot’s cosmetics rival. “I didn’t tamper with your product!” he insists. But Billy assumes Jack just had someone do it for him so he wouldn’t have to get his hands dirty. “Then who?” he asks, gesturing to the outside office. “Did you have Gloria do it?”

And outside of Jack’s office, Gloria is getting the third degree from Ashley, who demands to know what’s going on. “Was it Jack?” she asks nervously. But Gloria assures her that she’s barking up the wrong tree. “Your brother would never…” Gloria promises nervously. Which means Ashley moves on to the next most likely suspect! “Okay, well that leaves you,” Ash declares. “I’m calling the police!” Gloria moves around the desk to try and block her, begging Ashley not to do it. Is she guilty? 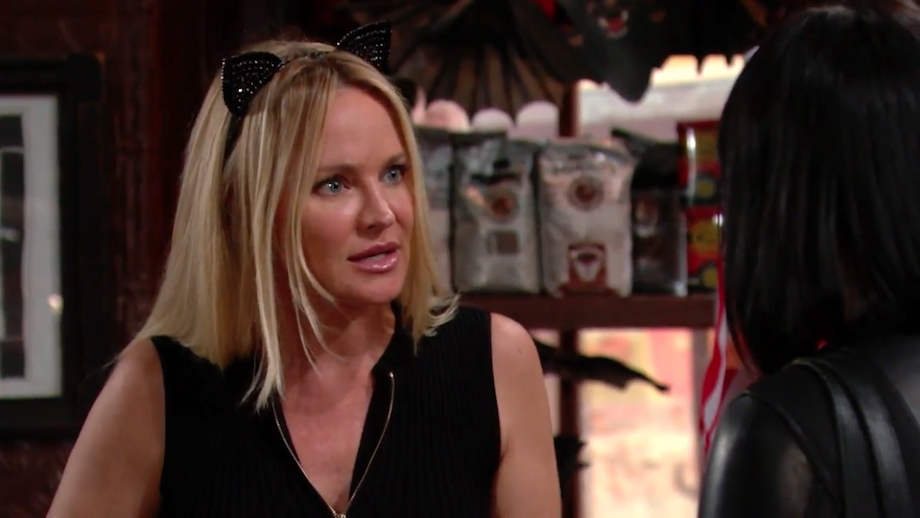 Scott’s determination to bring down the sex ring has landed him in hot water, with Zack setting him up for Natalia’s murder. Knowing full well her boyfriend isn’t a killer, Sharon is trying to help clear his name, and decides to question someone who might know a little something about the mysterious newcomer to Genoa City: Tessa! “I need to talk to you,” Sharon confides to the singer in Crimson Lights. She lowers her voice and whispers: “About Zack.” Might Tessa know something that could help them expose Zack as the villain here?

The Stars of Y&R Remember the Late Jeanne Cooper