It’s bad news all around in these spoilers from THE YOUNG & THE RESTLESS!

Now that Victoria has agreed to settle Juliet’s sexual harassment lawsuit, that part of things is over, but it doesn’t change the fact that Lily has to deal with Cane’s infidelity. You could cut the tension with a knife when the couple informs their kids about the latest news that the case is closed. “That’s a good thing,” Charlie remarks. “Over and done with.” Cane tries to smile as he agrees: “That’s the idea.” However, Mattie can tell that things aren’t quite right. “Then why aren’t you happier?” she asks her parents. This is going to be a tough one for them to explain… if they even choose to tell the twins the whole awful truth! 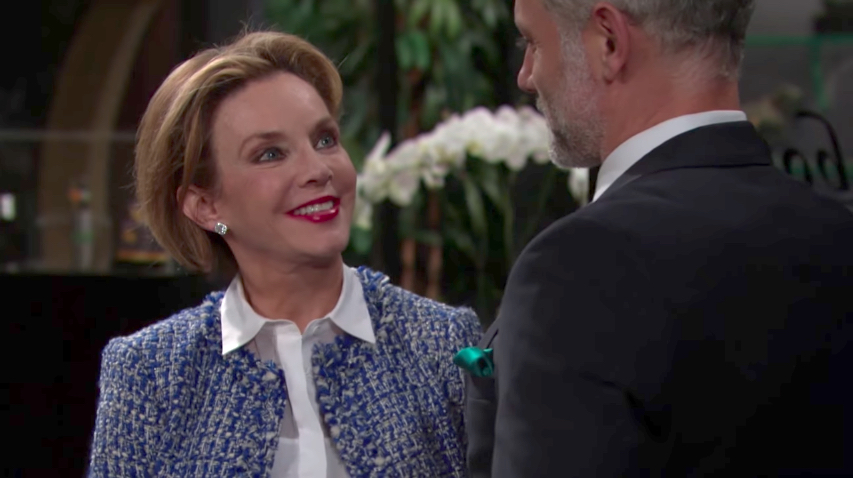 Are those dollar signs we see in Gloria’s eyes? (Photo Credit: CBS)

MUST SEE: Michael Muhney Speaks out on Rumors He’s Coming Back to Y&R!

Over at Jabot, Jack and Ashley are still processing the news that Dina has changed her will to leave Graham the bulk of her estate. Outside the office, Graham jokes to Gloria, “I’d much rather be out here than in there.” Knowing this handsome silver fox is one day going to become even richer than he already is, Gloria smiles and giggles: “Me too!”

And inside the office, Jack and Ashley have incredibly sour looks on their faces as Dina lays down the law. “That will represents my final wishes,” she warns her children. “You’d better respect them.” Is there anything that Jack and Ashley can say or do to convince Dina that she is making a terrible, terrible mistake trusting Graham?