There’s a lot of blame going around in Port Charles, but in these spoilers from GENERAL HOSPITAL, it looks like most people are trying to blame themselves! As Jason lies in his coma and his loved ones wait for him to wake up, they’re also trying to take the blame for getting him shot in the first place!

Ava tracks down Griffin at the boxing gym taking out his frustrations over the patient he lost on a bag. “You, Doctor Monroe,” she tells him, “are a hypocrite.” He’s been trying to get Ava to face reality, so can she do the same thing for the handsome young doctor?

When Parker happens to run into Kristina, she casually informs her ex: “I’m not seeing anyone.” Will Kristina be tempted to give it another try with her former professor? And inside Kelly’s, Valerie notices that Lulu is up to something. “Sounds like you’re planning something special,” Val remarks to her cousin. Does Lulu have another romantic night planned for Dante, or is it something else? 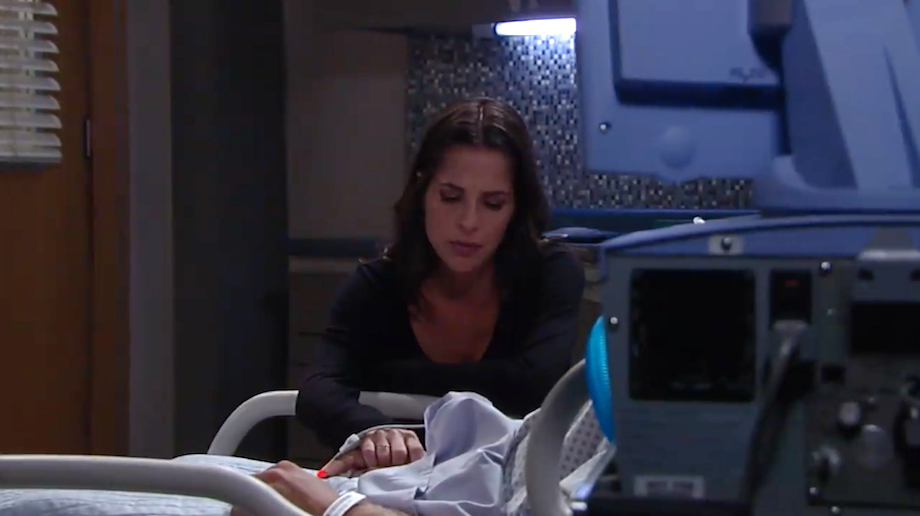 Sam begs Jason to come back to her. (Photo Credit: ABC)

At the hospital, Jason is out of surgery, but still in a coma and Sam sits vigil at his bedside. “Can you do me a favor,” she asks him with tears in her eyes, “and can you squeeze my hand?” Having gone home, Carly opens up to Michael about how she blames herself for the series of actions that led to Jason’s life hanging by a thread. “If I hadn’t forced your father’s hand,” she explains, “none of this would’ve happened!” And back at the hospital, Sonny is still hanging around, praying for his friend in the chapel. But then Dante walks in to announce: I’ve got some news.” Hopefully it’s good news because Sonny can’t take much more right now!

Maurice Benard Sent GH Fans Into a Frenzy When He Tweeted: “Steve Is Jason”