Plans are starting to come together in these spoilers from GENERAL HOSPITAL! Finn and Anna may be about to get what they’re after, and Ava and Patient Six could both be on the way home… but things aren’t going as well for Valentin, who finds himself on the wrong end of a gun!

Griffin made his way into the Russian clinic, and even rescued Ava from Dr. Klein by subduing him and injecting the physician with the syringe he intended to use on her! Seeing how much danger she’s in, Griffin doesn’t understand why Ava is still packing her bag. “Leave the luggage,” he protests. “Let’s get the hell out of here!” But how will Ava feel about leaving without her face being restored? Meanwhile, the Russian priest brings a man to meet with Patient Six. “His ship goes to America,” the priest reports. The man with Jason’s old face looks hopeful. “You can get me on board?” he asks the sailor. Has he finally found a way to get back to his family? 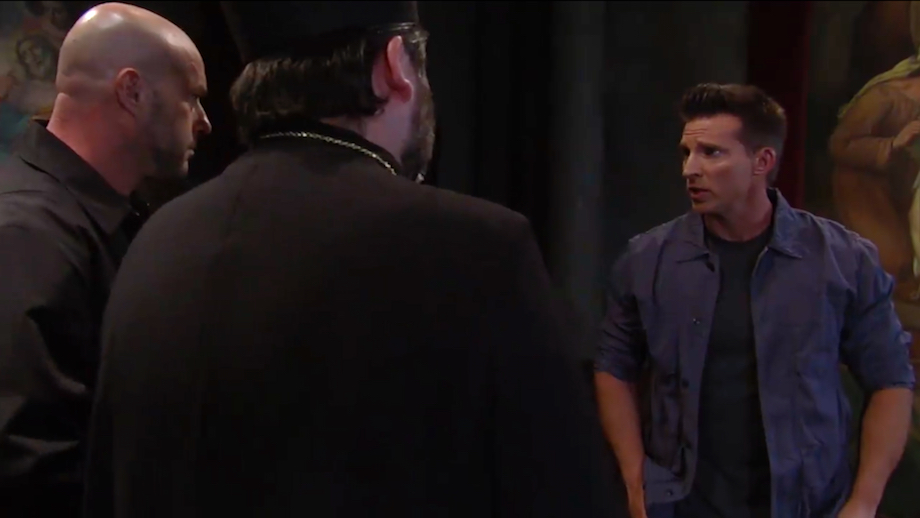 Patient Six is determined to get home one way or another! (Photo Credit: ABC)

In Monte Carlo, Finn admits to Anna that he isn’t confident that he was able to get through to their target. “If Cassandra doesn’t bite,” he asks the super spy, “do you have a Plan B?” Anna has been doing this long enough that she probably has a Plan B, C, D, and E! But it may not be necessary because Cassandra does appear to be interested in taking Finn up on his offer to treat her in Port Charles. But first, she has some questions that need answering… from Valentin! “We have matters to discuss,” Cassandra warns the Cassadine over the phone. “Things of mutual interest.”

And while this mystery woman may bring trouble for Valentin if she comes to Port Charles, the guy already has plenty to deal with at the moment! The Cassadine is stunned to be confronted by Laura… who pulls out a pistol and aims it directly at him! “Is this how it felt when you held the gun on my son?” she asks, fury glinting in her eyes. Can anyone talk her out of taking violent revenge for Nikolas’ death?