People have to be careful what questions they’re asking in these GENERAL HOSPITAL spoilers because they may not like the answers they get! Kiki and Griffin are keeping a secret from Ava, Laura must make a decision about her future, Nathan wants answers from his mother, and Anna worries that Finn has blown everything!

Ava comes upon Kiki and Griffin standing a bit too close together with his hand on her back, talking quietly to each other. “No,” Griffin whispers. “She can’t know yet.” What are they hiding? Will Ava assume that Griffin is making a play for someone younger — her daughter?

Lulu is continuing to work on her story regarding the election fraud and has some questions for Dante and Jordan. “How long until Lomax is forced out of office?” she asks. Will her investigative journalism help improve life in Port Charles? 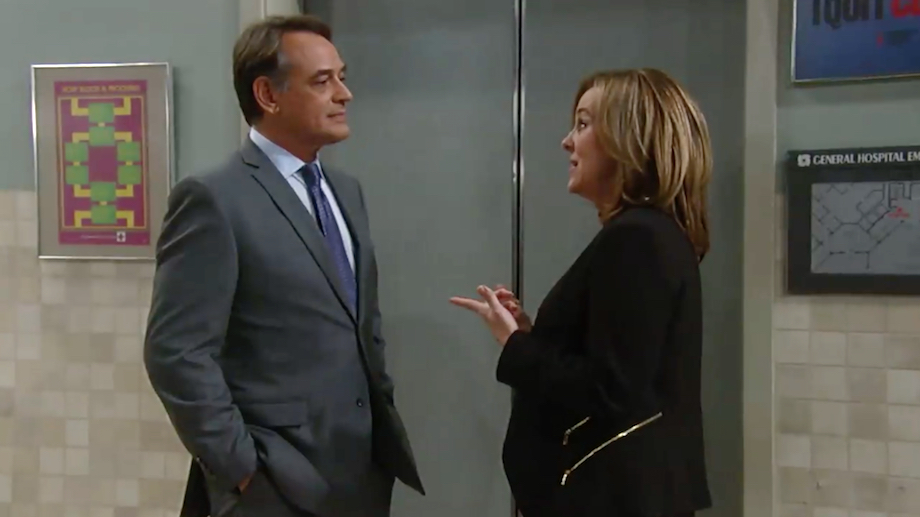 Kevin and Laura are almost ready to start their life together! (Photo Credit: ABC)

It was a little touch-and-go for a while there, but Kevin and Laura finally managed to tie the knot on Christmas. And now the newlyweds have a big decision to make. “My last name,” Laura remarks to her new husband. “We’ve never talked about that.” Will she remain Laura Spencer or become Laura Collins?

Nathan is worried about his child with Maxie because he doesn’t know his own medical history. So Maxie approaches Amy at the hospital for a big favor. “Help me put Nathan’s mind to rest,” she begs. Meanwhile, Nathan continues to press Obrecht for details about his origins. “What is it that you aren’t telling me about my father?” he asks his mother.

Finn is trying to work with Anna to help bring Cassandra down, but that may turn out to be easier said than done. “You’re not the man I thought you were,” Cassandra tells the doctor. Eavesdropping on the conversation with a listening device, Anna leaps to her feet muttering: “Damn! No!” Has Finn slipped up and destroyed their carefully constructed plan?

Don’t miss this tease for today’s dramatic episode, and for more GH previews, keep reading the ABC edition of Soaps In Depth magazine

Brandon Barash Mourns the Loss of His Beloved Father, Jerry

Steve Burton Teases a Sam and Jason Reunion on GH