Robert dragged Valentin out of the Nurses Ball and gave him hell… only to have the Cassadine warn him that Anna was walking into a trap. At the same time, Jason, Sam and Spinelli confirmed Henrik was Peter and realized Anna was meeting him. Peter was actually delayed — because he had to deliver Maxie’s baby boy, James! After taking her and the newborn to GH, Peter called Spinelli, who rushed to their side. Jason, meanwhile, rushed to the big meet and found Anna staring down Peter’s gun. Both men were ready to kill… until Anna revealed she was Henrik’s real mother. Finn arrived to overhear and, after calling Robert and comforting Anna, went to look after her son — who was taken to the hospital after collapsing. Before Peter was released from GH, Anna told him everything, including that Valentin was the one responsible for handing him over to Faison! She also refused to testify against her son, who tried to cut a deal with the WSB, but was denied.

Maxie and Lulu Teamed Up

Valentin managed to negotiate his freedom, but Nina walked out on him over the Henrik situation. She even insisted Charlotte would be better off without him. Realizing Lulu had been secretly investigating Henrik, Dante was furious with his wife. Maxie, however, didn’t just forgive her bestie — she asked for her help in taking down Peter! 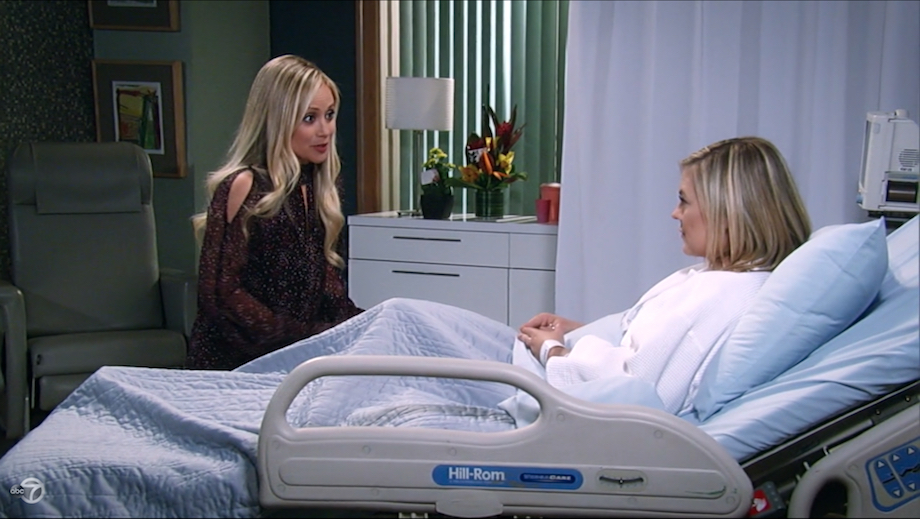 Drew Wanted His Memories Back!

With Finn and Anna making a go of it, Julian comforted Alexis… and kissed her! She responded, before catching herself and kicking him out. Worried her relationship with her evil father might be sabotaging her taste in men, she decided to spend some time on Kevin’s couch. Kim, meanwhile, was upset with Julian and growing closer to Drew — who planned to try to reclaim his memories in spite of her, Andre and Franco’s concern it might put his life in danger. Drew was desperate… but not desperate enough to help Peter escape in exchange for the infamous flashdrive.

After another inappropriate run-in with Bensch, Kiki found innocent comfort in Griffin. She later got hammered while reconnecting with Michael. Griffin had a major blowout with Ava, only to run into Kiki. He tried to get her sober, but instead got drunk with her… and they hooked up! When Ava arrived full of apologies, Kiki hid in the bathroom and later begged Griffin not to tell. After Kiki left, Ava returned with seduction in mind. Back at GH, Kiki received a blistering review from Bensch, who offered to write a better one in exchange for sexual favors! Finally pushed too far, Kiki vented to Elizabeth, who convinced her friend and co-worker she should go to the hospital higher-ups with her complaints against the pervy doc.

Knowing Sonny and Jason were on the case, Carly pled not guilty by reason of insanity and was remanded to Pentonville to await trial for her supposed actions against Nelle. After finding out that Lucas and Brad didn’t know the identity of their baby’s mother, Julian was more than a bit concerned about his son’s pending adoption. Wanting a big wedding, Franco decided to track down Elizabeth’s father, Jeff Webber, and his wife.

If GH Wants to Bring Back Jeff Webber, We’ve Got Some Casting Suggestions

Jeffrey Vincent Parise Shaved and Cut His Hair for a New Role and We Barely Recognized Him!