With blackmail in mind, Ava had Mike arrested for kidnapping Avery, but Sonny couldn’t bring himself to trade his daughter’s custody for his father’s freedom. Thankfully, Nelle helped Ava see that a compromise of shared custody might be better for her future with Griffin. Nelle scored more points with Michael by revealing she wanted Carly to be their baby’s guardian if anything happened to them. Griffin, meanwhile, was horrified to learn Ava had used Sonny’s ailing father as a pawn — twice!

Determined to prove she wasn’t crazy, Carly started seeing Kevin and agreed to take an anti-anxiety medication — one with serious potential side effects. With Nelle’s scheme playing out perfectly, Lucy got Ava to sign a fat check for the Nurses Ball… with her assistant’s disappearing ink!

With Lucas expecting to adopt a newborn in June, Julian shared a warm moment with his son and vowed to prove himself to his family. Then he invited Kim to lunch, but she already had plans with Drew. As Kim, Drew and Oscar bonded, Julian visited Alexis… only to spy her leading Finn to her bedroom!

With Faison’s letters destroyed and the photo of Henrik a fake, Sam, Jason and Spinelli found a box left by the villain, that would self-destruct unless opened by Valentin! Feeling more like her old self, Sam couldn’t wait to follow the leads and get back to her life in Port Charles… but not with Drew, whom she asked for a divorce. 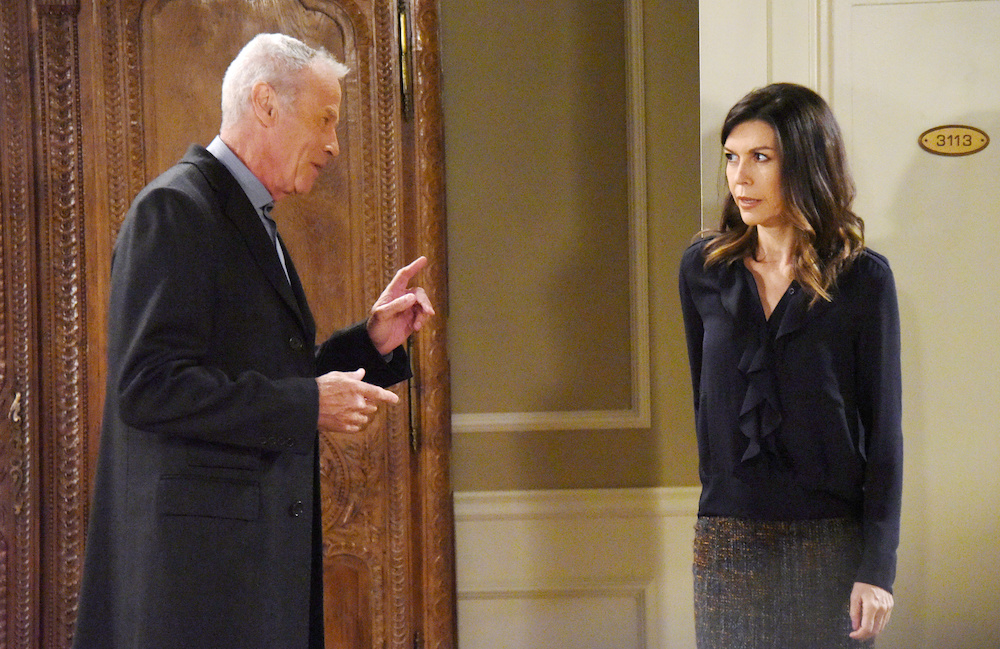 ”Okay, but don’t tell anybody else.” (Photo Credit: XJJohnson/jpistudios.com)

When Anna revealed that she believed Henrik to be her son, Robert insisted that remain a secret — and pushed her to open up to Finn. Robert became convinced that Valentin was the one who’d given Anna’s son to Faison decades ago. Furious, she hatched a plan against Valentin… who in turn set his sights on Robert. Maxie didn’t appreciate Nina trying to set Peter up with a model. Sam caught Curtis snooping in Peter’s office… and agreed to help him get the goods on the mystery man! Unaware Peter was playing her, Lulu wondered about the man claiming to be Henrik. After talking to her, Jason suggested they use the villain’s mother to lure him out of hiding. Instead of interfering, Anna told Jason she had a better idea how to handle the situation!

Kiki was crushed when Bensch became vicious and started questioning her place in GH’s shadow program. Later, he offered a lame excuse about generational differences, and Kiki was appeased… but that didn’t stop Griffin and the inappropriate doc from sharing a serious stare-down.

After Jordan’s cancer scare was cleared up, Curtis still wanted to make her his wife. With that in mind, he made T.J.’s day — and ruined Stella’s! — by asking for his blessing to propose marriage. Alexis, meanwhile, made the mistake of attempting to orchestrate a reunion between Finn and Chase. Not only was Finn furious with her for doing so, but he shot down his little brother’s hopes of them ever connecting.

The Most Memorable Moments From the 2018 Daytime Emmys