Instead of helping Patient Six, Ava gave Dr. Klein the phone number the mystery man had slipped her. And when the doc called the number, Sonny answered the phone! After Patient Six avoided questioning by pretending to be drugged, Ava overheard the doctor’s plan to move him to a more secure facility. Guilt-ridden, she helped Patient Six escape… only to learn her punishment was worse than anything she’d anticipated: She was informed she’d never be allowed to leave the clinic.

Griffin Flies to the Rescue

In Port Charles, Brick traced the mysterious call Sonny had received to St. Petersburg, so Sonny suspected the call was connected to fellow mobster Petrov. But when Griffin heard about the call, he knew better. Having realized that Ava had traded her testimony for Valentin’s help, Griffin grilled the Cassadine — who warned that she might never make it back to Port Charles. While Griff was reasonably worried, Sonny only wondered if Ava might be working with his enemies. With Brick on the case, Griffin demanded Sonny not hurt Ava and, after a pep talk from Franco, hopped on a plane to try and track down his missing friend.

A Familiar Face Is Revealed!

It turned out that beneath his mask, Patient Six looked exactly like Jason had before his supposed death. And when he bumped into Griffin in a Russian church and borrowed the priest’s phone… he called Sam! After Jason answered his wife’s phone, Patient Six turned off the cell — so Sam just figured it had been Griffin calling. Once Patient Six helped Griffin get into the clinic, the doc managed to get to Ava in the nick of time, knocking out Dr. Klein as he was preparing to inject her. After a heated reunion, the pair caught a plane back home. Ava challenged Griffin over why he’d come to save her. Patient Six, meanwhile, got himself onto a U.S.-bound cargo ship… only to run into another obstacle. 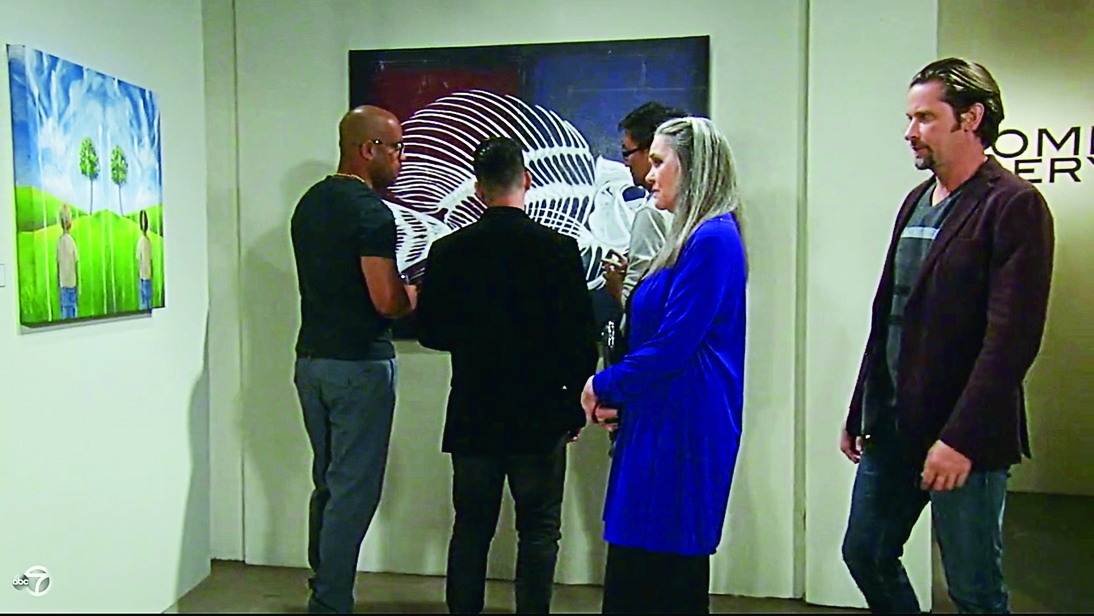 ”This picture speaks to me,” admitted Betsy. “It says, I’m derivative and overpriced.” (Photo Credit: ABC)

Jason Has a Twin!

Betsy finally told Franco that the imaginary friend he’d grown up with was indeed Susan Moore’s secret and very real twin boy! Since Alan and Monica only knew about the one baby, Susan had hidden Jason’s twin brother with Betsy. After claiming that twin had died young, Betsy begged Franco to keep the secret. Though he shared the whole story with Scott, Franco told Liz the kid in his photo was just a neighborhood boy. Later, he stopped at GH to donate a portion of the proceeds from his show to the hospital and restart the art therapy program. Learning that Andre had bought the twin painting, Franco opened up to his psychiatrist about everything — including his disturbing obsession with Jason.

Jason finally came out of his coma and promised Sam he’d stay out of danger from now on. Carly and Sonny were overjoyed — even though Jason’s vow to keep his family safe meant distancing himself from them. Jake, meanwhile, told his father about Franco’s strange photo, and Jason’s interest was piqued. He grilled Franco, who was honest about having suspected it was Jason in the photo… but then offered the same lie he’d given Elizabeth about the picture simply being a kid from the neighbor- hood. Franco also claimed to have lost the snapshot in question. 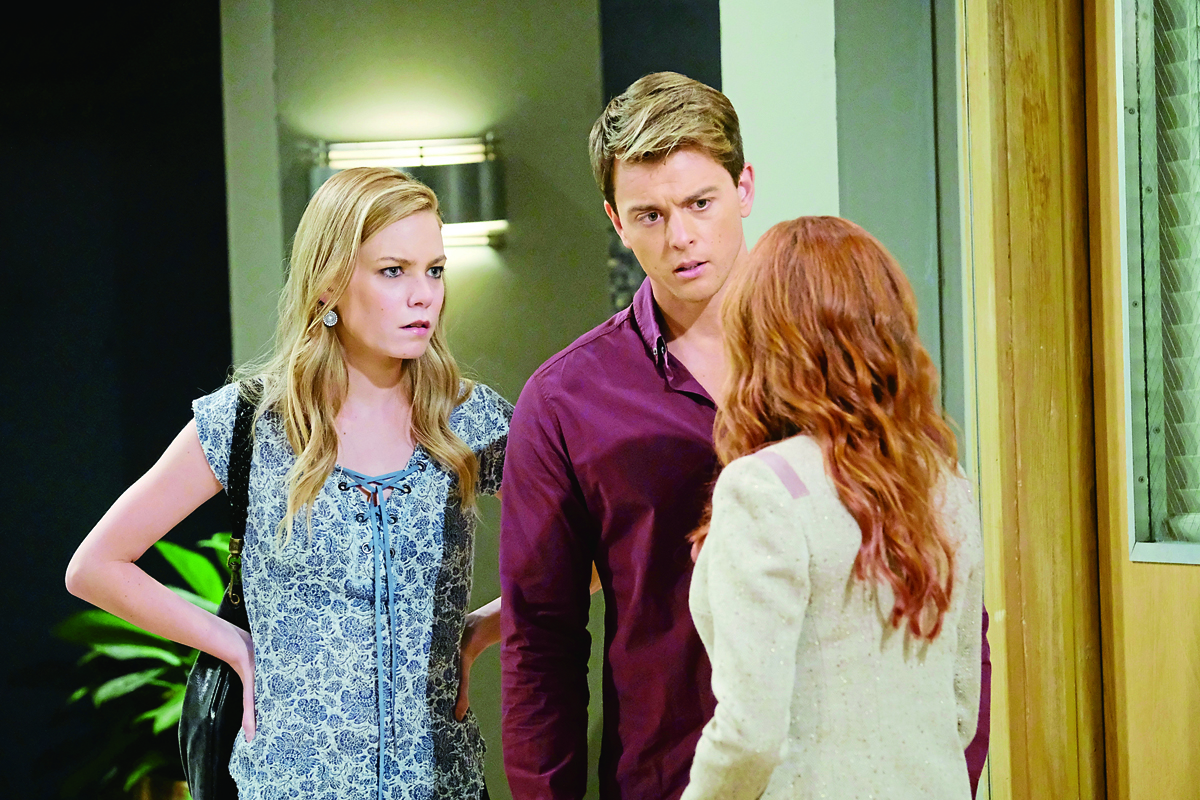 ”Bobbie, don’t make me through your past in your face,” said Michael. “If only because it’s weird to think about the fact my grandmother used to turn tricks!” (Photo Credit: ChrisD/jpistudios.com)

Kiki advised Nelle to simply come clean with Michael about anything from her past that might prove problematic. Nelle wasn’t thrilled Michael bought her condo for her, but he insisted she should trust him. With Michael having accepted her story about how her former beau had died, Nelle realized she had to have faith in him, too — but that didn’t mean she was going to accept Bobbie’s invite to a family function! As the young couple got closer than ever, Sharon — the sister of Nelle’s former fiance — arrived in Port Charles. She sought out Carly and warned that the black widow had driven a wedge between her brother and their family. Sharon then confronted Nelle, demanding she return the engagement ring she’d been given. Nelle insisted she didn’t have the ring, but Michael later found it in her apartment. When he didn’t like the explanation Nelle provided, she stormed out.

To protect Nathan’s identity at the book launch, Maxie hired several men to claim that they were the person who’d been dispensing advice. Unfortunately, Spinelli kept overhearing and misunderstanding things and eventually accused Nathan of having an affair with Amy. Frustrated, Nathan blurted out that he wasn’t having an affair, but was Man Landers — and everyone heard! With Amy’s connection to Man Landers still under wraps, Nathan seemed to enjoy the attention he was getting… but Spinelli noticed Maxie getting jealous. 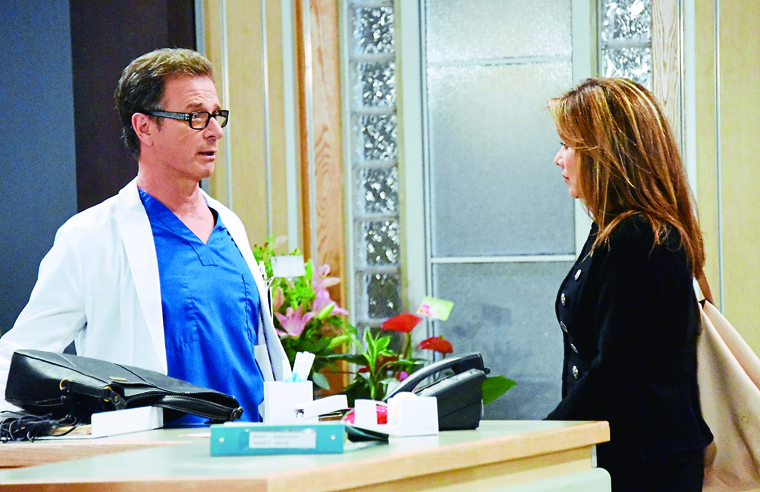 ”You want to call me Julian? Heck, I can do a little role playing!” (Photo Credit: XJJohnson/jpistudios.com)

Uncomfortable with her mother’s concern for Julian, Sam suggested Alexis consider dating the handsome Dr. Bensch. Dillon, meanwhile, was getting a bit jealous of the good doctor’s interest in Kiki! Kristina dropped out of PCU so she could date Parker — who accepted her invite!

Finn tried to pretend that he hadn’t gotten anywhere with Cassandra, but Anna wasn’t buying it. Intent on finding Cassandra’s connection to Valentin by luring her back to Port Charles with the promise of medical care, Anna pushed too hard and the dangerous stranger blew up at her. As Finn smoothed things over in Monaco, Valentin was gifting Nina some bling and promising his bad boy ways were a thing of the past. Then he took a flirty call from his colleague — Cassandra! — who wanted to know all about Finn. Valentin had nothing but positive things to say about Finn, although he was not so keen on Cassandra’s idea that they reconnect romantically. Laura later showed up wielding a gun! After hearing how he’d meddled with Ava’s testimony and forced Lulu into a joint custody agreement, Laura was determined to make Valentin feel the fear Nikolas had felt before dying. Laura left, but not before dropping a Helena-style curse on her enemy. As if that wasn’t bad enough, Valentin then learned Cassandra was on her way to town!

Jessica Tuck Previews Her New Role as Cassandra on GH